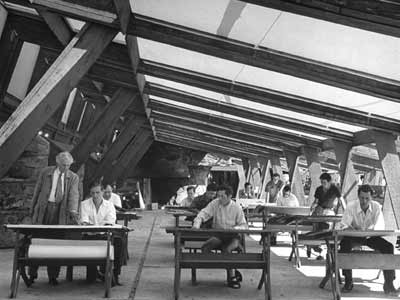 The idea for the Taliesin Fellowship was born in 1931, in the midst of the Great Depression. Wright and Olgivanna were looking for a steady source of income and realized that if they could attract two or three dozen students to pay a yearly tuition of $650, they would be better equipped to cover their costs. The project was launched in October of 1932, with Olgivanna at the helm running the estate. She would evolve into a den mother for the pack of students that started to trickle in. During the early years when commissions were scarce due to the economic woes of the depression, much time was spent renovating the property, with the labor of young architects like William Wesley Peters, Henry Klumb, Edgar Tafel, Jack Howe and many others.

Many buildings were designed by Wright and his apprentice draftsman at Taliesin, including Fallingwater, the first Usonian houses and the Johnson Wax building. Wright would create some of his best work in this era; giving his students a shot at designing a commission first, and afterwards, critiquing their work. In between work and chores, Wright (who adored entertaining) hosted many events for his troupe: picnics, foreign films, fine dining, Sunday services, birthday parties, boat trips, charades, concerts and holiday parties.

This atmosphere created strong bonds of loyalty and camaraderie that were almost impossible to break if an architect felt he was ready to leave Wright's flock. Wright would often view this move as the betrayal of a future competitor, and many an apprentice left after a less than harmonious parting.

During this time, the relationship between Olgivanna and Wright was tempered and tested, but the two remained dedicated to each other through the years. A woman with many facets, Olgivanna could be implacable and unyielding, generous and kindhearted, but above all her devotion to Wright was unwavering -- and likely because of this, the marriage worked.

Eventually, the Wisconsin winters started to wear on everyone, and in 1937, Wright bought land in Arizona with the idea of Taliesin West in mind. The annual pilgrimage was typically an adventure. On one occasion, Wright wanted to see the north side of the Grand Canyon but a sandstorm in Death Valley delayed them. Coming up to the canyon without headlights, Wright finally called for a halt -- 15 feet (4.572 meters) from the rim!

Hands-on building experience is something the apprentices definitely got out of their time at Taliesin West in the early years. The entire complex was built by the Fellowship from scratch. Magnificent buildings, terraces and pools were all part of the oasis at Taliesin West -- much of it designed on brown wrapping paper and built the following day. The local flora was treated with respect, and cacti were often replanted if they were in the way. The desert camp provided the group with a cathartic release and a new perspective each year the party arrived to avoid a winter in Wisconsin.

On the next page, we'll look at the state of Wright's work and the legacy of his Taliesin Fellowship as they are today.