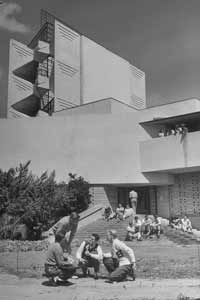 The ongoing restoration of the 12 Wright buildings at Florida Southern College is one example of people working to save Wright's aging legacy. This photo of the Annie Pfeiffer Chapel was taken at the campus in 1948.
Alfred Eisenstaedt/Time & Life Pictures/Getty Images

Wright's architecture and construction wasn't always perfect -- leaky roofs and structural problems were often part and parcel of a Wright building. The Johnson Administration Building, Wingspread and Fallingwater are all examples of buildings that exhibited problems after they were built. Despite these flaws, all are in use today, albeit not all for their original purposes.

Whether the prairie style homes of his early period or the Usonian and ultramodern homes of later years, the large estates or the commercial projects of all sorts, Wright's buildings are cherished by many. Numerous groups today are striving to preserve his works, many of which are hitting the century mark or will in the near future, but several challenges and hurdles often lay in their paths.

According to the Frank Lloyd Wright Building Conservancy, nearly 20 percent of Wright's works have been lost. The most common culprits are simply fire, neglect or new developments. Plus, erosion can be an issue along with other weather-related concerns. Owners careless of the history of a building might make renovations that detract for the original features of the home -- though these can be largely restored with enough time, energy and money. One example is the Grand Beach, Mich., W.S. Carr House, which was built in 1916 and demolished in 1999, much to the dismay of many working to save the house, despite the poor condition it was in.

The Taliesin Fellowship has evolved into Taliesin, the Frank Lloyd Wright School of Architecture, a school that carries on Frank and Olgivanna's vision. Wright established the Frank Lloyd Wright Foundation in 1940, deeding all of his intellectual property and archives to the organization, of which Olgivanna was president until her death. This umbrella organization now includes the activities at the architecture school and the work of Taliesin Preservation, Inc.

Other groups working to preserve Wright buildings and honor his memory with preservation and educational efforts and tours (some of which overlap in organizational structures) include the Frank Lloyd Wright Preservation Trust, the Frank Lloyd Wright Wisconsin Heritage Tourism Program, Inc., and several national and state historic preservation offices and nonprofit agencies around the United States and in Japan -- the only country besides America that can lay claim to Wright architecture.

Wright hobbyists abound, and hundreds of books and articles have been written about the architect both during his lifetime and posthumously. He has also been the recipient of many awards and acknowledgements, including being named the greatest American architect of all time by the American Institute of Architects in 1991. To say that Wright has been something of an influence on the styles of other architects today would certainly be an understatement. For lots more of the Wright stuff, all things architecture and related topics, design your eyes on the links below.