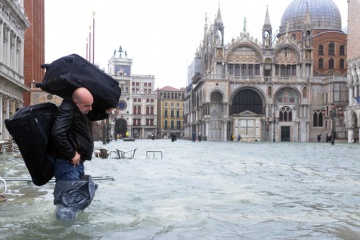 Venice is in danger of becoming the next Atlantis. That's right, this famed city is brimming with priceless art, gorgeous architecture, holy sites ... and water. Lots and lots of water.

Naturally, Italy isn't content to watch one of its cultural crown jewels slump into the sea, so the country is taking on an unprecedented water damming project, which it hopes will block out rising tides and preserve Venice for generations to come. The dam is called MOSE, an acronym for an experimental version of the project -- Modulo Sperimentale Elettromeccanico -- or in English, Experimental Electromechanical Module. The name also aptly harkens to the biblical figure Moses, who parted the Red Sea.

This feat is almost as incredible as the Red Sea incident. MOSE will seal off the city from rising tides so that the denizens and structures in Venice stay dry ... well, drier.

MOSE is necessary because Venice is slowly but surely getting swamped. The city is basically propped up in the middle of a lagoon on the eastern shore of Italy, rising just barely above the waterline on a centuries-old clutter of wooden stilts, sand and rubble.

Sea tides surge in and out of the lagoon through three inlets, and these days, those tides are getting higher and higher, to the tune of more than 3 millimeters (about one-tenth of an inch) per year [source: IPCC]. Many scientists attribute rising ocean levels to global warming.

But Venice's problem is more complicated than just rising water. The city itself is sinking due to a combination of soil compaction, tectonic plate shifting and extraction of fresh water from beneath the city.

All of these factors result in more frequent and more severe water intrusions onto sidewalks and streets and into homes, businesses and sacred places. In the early 1900s, the city's low-lying areas faced flooding around 10 times annually. Now, the same places are waterlogged dozens of times per year.

This isn't all that surprising when you consider circumstances from a historical perspective. Sea levels in Venice are a whopping 6 feet (1.8 meters) higher since the city's beginnings 16 centuries ago. And in just the past century, Venice has plunged 9 inches (22.9 centimeters) into the sea [source: Milasin].

Saving Venice will take a dam of gargantuan size. And that's exactly what the Italians have in mind.