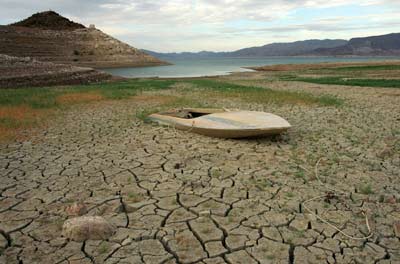 Waterfall Image Gallery Living with a waning drinking supply has long been a fact of life for many countries. In the Western world, it's a new, yet serious problem. See more waterfall pictures.
Ethan Miller/Getty Images

­­Water is becoming an increasingly important issue in the developed world. But this issue is nothing new for other, less developed nations. For centuries, clean drinking water has been hard to come by for many populations, especially the poor. In some areas, water may be available, but it's often disease-ridden, and drinking it can be fatal. In other areas, a viable water supply is sim­ply not available at all.

­A 2006 United Nations report estimated that as much as 20 percent of the world's population doesn't have access to clean drinking water [source: BBC]. This leads us to wonder: If we need it so badly, why can't we jus­t make it?

­Water is made of two hydrogen atoms attached to an oxygen atom. This seems like pretty basic chemistry, so why don't we just smash them together and solve the world­'s water ills? Theoretically, this is possible, but it would be an extrem­ely dangerous process, too.

To create water, oxygen and hydrogen atoms must be present. Mixing them together doesn't help; you're still left with just separate hydrogen and oxygen atoms. The orbits of each atom's electrons must become linked, and to do that we must have a sudden burst of energy to get these shy things to hook up.

­Since hydrogen is extremely flammable and oxygen supports combustion, it wouldn't take much to create this force. Pretty much all we need is a spark -- not even a flame -- and boom! We've got water. The hydrogen and oxygen atoms' electrons' orbits have been conjoined.

But we also have an explosion and -- if our experiment was big enough, a deadly one. The ill-fated blimp, the Hindenburg, was filled with hydrogen to keep it afloat. As it approached New Jersey on May 6, 1937, to land after a trans-Atlantic voyage, static electricity (or an act of sabotage, according to some) caused the hydrogen to spark. When mixed with the ambient oxygen in the air, the hydrogen exploded, enveloping the Hindenburg in a ball of fire that completely destroyed the ship within half a minute.

There was, however, also a lot of water created by this explosion.

To create enough drinking water to sustain the global population, a very dangerous and incredibly large-scale process would be required. Still, over a century ago the thought ­of an internal combustion engine -- with its controlled repeated explosions -- seemed dangerously mad. And as water becomes scarcer, the process of joining hydrogen atoms to oxygen atoms may become more attractive than it is currently. Necessity, after all, is the mother of invention.

But there are safer ways of creating water out of thin air, and projects to do just that are already underway. Read the next page to learn about a few mad scientists who may end up solving the world's impending water crisis. 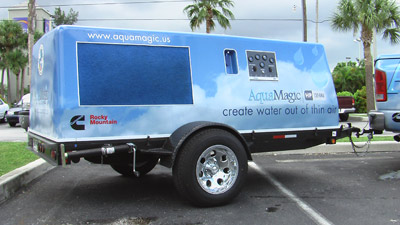 There's water around us all the time, we just can't see it. The air in our atmosphere contains a varying amount of water vapor, depending on the weather. When it's hot and humid, evaporated water can make up as much as 6 percent of the air we breathe. On cold, dry days it can be as low as .07 percent of the air's makeup [source: U.S. Department of Energy].

This air is part of the water cycle, an Earth process. Crudely put, water evaporates out of rivers, lakes and the ocean. It's carried up into the atmosphere, where it can collect into clouds (which are actually just accumulations of water vapor). After the clouds reach the saturation point, water droplets will form, which we know as rain. This rain runs off the land and collects into bodies of water, where the whole process begins again.

The problem is, the water cycle goes through dry periods. Because of this, some inventors have begun to wonder, why wait? Why not pull the water vapor right out of the air?

One Australian inventor has done just that. Max Whisson is the creator of the Whisson Windmill, a machine that uses wind power to collect water out of the atmosphere. Whisson points out to the Australian Broadcasting Corporation that water vapor amounts to about "10,000 billion litres [about 2,600 billion gallons] in the bottom kilometere [about .62 miles] of air around the world" [source: ABC]. What's more, this water is replaced every few hours as part of the water cycle.

Whisson's windmill uses refrigerant to cool the blades of his mill, which he's named Max Water. These blades are situated vertically rather than diagonally, so that even the slightest breeze turns them. The cool blades cool the air, causing the water vapor to condense -- become liquid water again. This condensation is then collected and stored. Whisson's windmill can collect as much as 2,600 gallons of water from the air per day.

Whisson says that his biggest challenge isn't the engineering behind his invention but finding the venture capital to back it -- he says that people think it's too good to be true. This problem would sound familiar to a pair of American inventors who have a water-making invention of their own.

Jonathan Wright and David Richards have created a machine that's similar to Whisson's, except that it resembles a collapsible pull-behind camper more than it favors a windmill. This invention -- which its creators call AquaMagic -- pulls air directly from the area surrounding it. Inside the machine, the air is cooled via a refrigerated coil. The air condenses, and the water is collected, purified, and released through a spigot.

The AquaMagic machine -- which currently cost about $28,000 per unit -- can produce up to 120 gallons of purified water in 24 hours, and since it's small it can be toted to disaster sites and Sub-Saharan Africa alike. But it also has one drawback: To produce this much water, AquaMagic requires about 12 gallons of diesel fuel. It's here that the Whisson Windmill (which runs about $43,000 per unit) has a clear advantage over AquaMagic: It's totally green. It runs exclusively on wind power, requiring no fossil fuel. Even the condenser runs off the power generated by the windmill's turbines.

Speaking of the environment, why go to the trouble of collecting water out of the air? Why not simply cause more rain to fall? It may sound far-fetched, but this is actually done -- at times, with catastrophic consequences. Find out why it may not be a good idea to manipulate the water cycle on the next page.

Cloud Seeding and the British Disaster 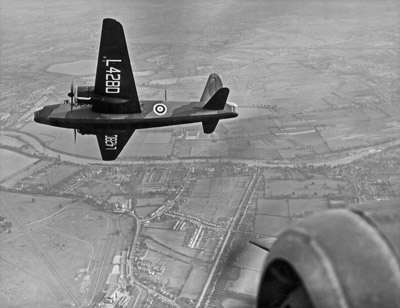 HowStuffWorks has discussed China's plan to prevent rain during the opening ceremonies of the 2008 Olympics in Beijing. The process, called cloud seeding, works by firing silver iodide into storm clouds in the days leading up to the event. The Chinese government hoped it could essentially "use up" the existing clouds and assure clear skies for the ceremony.

The country's been doing it for decades -- with positive results. But another experiment in cloud seeding, on the other side of the Eurasian land mass, didn't go so smoothly.

Following World War II, the British government was still looking at ways to get a leg up over enemy militaries. The Nazis had come close to destroying Britain, and the United Kingdom had developed a taste for preparation. The British government looked to the skies for an advantage. The Royal Air Force (RAF) began experimenting with cloud seeding. By impregnating the clouds with the particles needed to create a severe thunderstorm, the British could effectively thwart the movement of troops and even literally rain out enemy advances. But the cloud-seeding project went terribly awry.

It's not that the experiments with cloud seeding didn't work. It worked too well.

In 2001, the British Broadcasting Corporation (BBC) investigated rumors that the RAF had seeded the clouds over England. They turned up first-person accounts of some of the pilots who were involved in a top-secret mission called Operation Cumulus. During this August 1952 operation, RAF pilots flew above the cloud line, dropping payloads of dry ice, salt and -- like the Chinese currently use -- silver iodide.

After just 30 minutes, rain began to fall from the infected clouds. At first, the RAF pilots -- dubbed rainmakers by the press -- reputedly celebrated their success. But within the week a deluge began. By the end of the month, North Devon, an area of England near the site of the cloud-seeding experiment, experienced 250 times the normal amount of rainfall [source: BBC].

On August 15, 1952, the day the rain started, an estimated 90 million tons of water coursed through the town of Lynmouth in just one day [source: The Guardian]. Entire trees were uprooted, forming dams and allowing the tide of the two rivers flowing through Lynmouth to grow even stronger in force. Boulders were carried by the current, destroying buildings and carrying residents into the sea. In all, 35 Britons lost their lives that day as a result of the torrential rain. Britain's Ministry of Defense maintains that it had not experimented with cloud seeding prior to the Lynmouth incident.

China and Britain paint two versions of the same picture. On one hand, the Asian nation has successfully created a cloud-seeding program. They've managed to generate irrigation for arid croplands from the ultimate source. But the British disaster shows the potential results of toying with the forces of nature.

And still, we need water more than ever. Using explosions isn't viable to produce water currently, and AquaMagic and Whisson's Windmill aren't being produced on a large enough scale to help with the immediate need for water. Water is a finite resource, and one life on Earth can't do without.

For more information on all things water, read the next page.