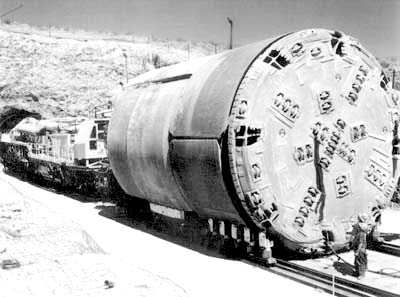 Today, the New York City subway system is in the middle of a massive renovation. One of the planned additions is a new tunnel stretching all the way from Long Island to Manhattan. A tunnel-boring machine (TBM) will do much of the digging.

A TBM is a machine so large that it usually has to be transported in pieces. It uses discs and scrapers to crush and remove rock and debris, creating a tunnel. A conveyor removes this debris from the tunnel so crews can dispose of it. Although it moves slowly, a TBM can dig through both hard bedrock and softer soil, and it supports the tunnel as it digs.

But machines like this didn't exist during the construction of the world's first subways. Building crews had to excavate the subway lines in cities like London and Paris by hand. This was slow, difficult, dangerous work. For example, digging the New York City subway tunnels required close to 8,000 laborers. Thousands sustained injuries during construction, and more than 60 died. Improved construction methods haven't completely prevented subway construction accidents. In January 2007, a collapse at a subway construction site in Sao Paulo, Brazil buried a minibus and several dump trucks and created a 260-foot-wide crater.

Through the years, crews have used a variety of methods to excavate the subway tunnels. Some have blasted rock with dynamite, and others have used movable shields to protect diggers while excavating hollow tubes under streets and buildings. In the 1950s, some crews started using the New Austrian Tunneling Method (NATM), a collection of techniques for determining how and where to dig. You can learn more about other modern tunneling methods in How Tunnels Work.

In a cut-and-cover excavation, crews dig a trench and cover it with a temporary or permanent road surface.

One of the most commonly-used methods of early subway construction was the cut-and-cover method. This method required workers to do exactly what the name suggests -- cut a deep trench and cover it up. In order to make a stable covering over the excavation site, workers drove piles on either side of the trench. Then, they placed trusses and beams across the trench, using the piles for support. A temporary or permanent roadway could rest on this surface. The beams and trusses could also hold hanging supports for the pipes and conduits unearthed during the tunneling process. With this method, crews could usually create a tunnel that was deep enough for a train to travel through but shallow enough to avoid hitting nearly impenetrable bedrock.

This method was safer and more practical than digging horizontally underground. However, crews generally used city streets as guidelines for where to dig, which caused the complete, but temporary, destruction of existing roads. Planners were willing to accept this inconvenience because using the roads as a guide made tunneling easier. First, it allowed planners to make sure that the subway went where people needed it to go. Second, it reduced the likelihood of encountering building foundations or otherwise damaging existing structures.

But following the road doesn't always prevent work crews from running into unexpected obstacles. We'll take a look at some of these in the next section.

After digging subway tunnels, workers use a variety of materials to make them waterproof. Common historical methods included lining tunnel floors with gravel, applying waterproof material coated in concrete and lining the tunnel with asphalt and brick. Modern subway crews often use materials like Shotcrete, or sprayable concrete, to finish tunnel walls. Many tunnels, particularly those that house subway stations, also have a decorative layer of tile or stone.