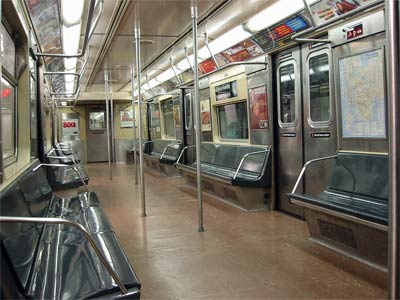 At first glance, a subway is simple -- it's a train that runs through a tunnel. Most of the time, the train consists of several connecting cars that contain durable seats as well as poles and straps for people to hold on to when the train is full. The train runs on rails, which often have the same gauge as other rail systems around the city. In New York City, for example, the subway tracks' gauge is 4 feet, 8.5 inches (1.4 meters), which is the same as major railroad tracks. This allows the subway to connect to other railways.

But a subway also requires several other systems that riders can't always see. In some subway systems, the trains themselves, known as rolling stock, are extremely complex. The subway in Copenhagen, Denmark, currently in construction, uses completely computerized, driverless trains. The ongoing upgrade to the New York City subway will replace its older cars with automated cars, each of which will contain multiple computer systems. These systems will control everything from the interior lights to navigation. The trains will even have the capability to use brake heat to generate power. In such automated systems, a collection of sensors detects trains' locations in relation to one another. Computer programs keep track of where all the trains are, reducing the possibility of human error and improving the overall efficiency of the system.

Usually, automated subways also include surveillance systems, such as closed-circuit TV, to allow people to monitor trains' progress and safety from a control room. Two-way radio systems allow passengers to talk to employees in the control room or summon help in case of an emergency. Sensors also detect objects near the train or in doorways, so people don't get caught between the doors or hurt themselves trying to board the train before it departs.

Subway systems that don't use automated trains have an extensive collection of signs and signals to help drivers operate the trains safely. Signs mark everything from speed limits to locations of fire extinguishers. Signals typically use colored lights to let drivers know when to stop, whether the track ahead of them is occupied and when to proceed with caution. Infrared sensors, capacitance plates or short-circuits created by the cars' wheels can let a signal know when a train is present. That signal can communicate with adjacent signals, ensuring that two trains do not try to occupy the same section of track at the same time.

Some signals also use physical mechanisms to make sure drivers obey them. For example, some signals can physically activate an emergency brake on a subway train if the driver continues past a stop signal. In the original New York City subway tunnels, drivers had to use a key to reset stop signals before they could proceed. The term keying by, still used in some signal situations, comes from this procedure.

A few early subways used steam engines, but in most existing subways, the trains, tunnel lights and station equipment all run on electricity. Overhead wires or an electrified rail known as the third rail supplies power to the trains. The third rail lies outside or between the subway tracks, and a wheel, brush or sliding shoe carries the power from the rail to the train's electric motor. In the New York City subway system, the third rail carries 625 volts of electricity, and the original lines required their own power plant to operate. A series of cables and substations carried the electricity from the power plant to the third rail.

Electrical power also controls the subway's ventilation system. Many subway systems include numerous sections of above-ground track and station entrances that are open to the air. However, natural air circulation from these sources isn't enough to keep the air in the tunnels breathable. Subways have an extensive series of fans and air shafts that circulate fresh air. The amount of circulation required is immense -- the planned ventilation system to be included in the New York City subway upgrade will move 600,000 cubic feet of fresh air every minute.

All of these systems add up to a lot of moving parts, many of which are underground and relatively inaccessible. In the next section, we'll explore what it takes to maintain a subway and keep it running.