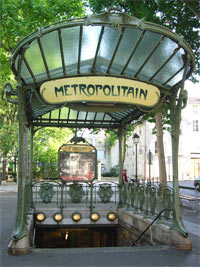 Beneath the streets in every city, subway crews can find a maze of water and sewer pipes, electrical conduit, cables and pneumatic tubes. Modern tunneling machines can allow workers to dig a tunnel below these obstacles, but at some point the tunnel has to reach the surface. Many subway systems include a series of shafts that act as emergency exits, and all have entrances that people can reach from the street level. This makes it impossible for crews to completely avoid the existing city infrastructure.

Sometimes, workers have to reroute existing pipes and cables before construction can continue. In other cases, workers can excavate around them and suspend them from the surfaces above. Occasionally, workers uncover pipes or conduits that don't appear on any city blueprint -- this adds the extra step of determining exactly what purpose the pipes serve and whether they can be removed. But in some cases, working around the pipes and tubes is the easy part. In cities around the world, crews have found a number of other natural and manmade obstacles when excavating subway tunnels. A common difficulty involves underground water. Workers can discover anything from loose, wet soil to aquifers, or sources of ground water, while digging. Sometimes, crews can use pumps or dig dewatering wells to remove the water. Some water sources require more extreme measures. During the excavation of the Paris subway tunnels, workers used tubes of low-temperature calcium chloride to freeze unmanageable mud, allowing them to remove it as though it were solid clay.

In addition to underground water, many subways have to cross rivers and other aboveground bodies of water. Sometimes, a crew can dig under a river using modern tunneling machines. But in some cases, the soil below the river is too wet and muddy to manage. Digging under a river can also be particularly dangerous -- during the excavation of the Paris subway lines, attempts to dig under the Seine led to several drownings. In another attempt, workers dropped sealable enclosures to the bottom of the river, then used compressed air to force all the water from inside the enclosure. Within the confines of the enclosure, crews could keep digging. The work was difficult, though, and these workers generally received higher wages than those who tunneled through ordinary soil and rock.

In the 1960s, workers in San Francisco used a version of the cut-and-cover method to create a tunnel through the San Francisco Bay. Workers dug a trench in which to bury prefabricated tunnel sections. Divers placed the sections in precise positions and secured them to one another. Flexible joints at each end help protect the tunnel from earthquakes.

In some cases, naturally-occurring geological formations can bring construction to a halt. In New York City, hard-to-cut stone called schist kept workers from digging very deeply into the ground below the city. Modern crews can use explosives or tunnel-boring machines to get through dense rock, but the earliest crews sometimes had to reroute subway tunnels to bypass impassable stone.

Workers excavate a site for a subway station in Prague.
Public domain image

Finally, numerous crews have discovered manmade structures while digging subway tunnels, particularly in very old cities. Crews in Paris, for example, uncovered cannonballs, catacombs full of human bones and the foundations of historic buildings. The Paris subway also travels through very deep quarries that have existed since ancient Roman times. In some cases, the quarry floor was far below where the subway track needed to go. Workers had to build bridges inside the quarries. In other words, portions of the Paris subway are underground, elevated railways.

A network of tunnels is complex and challenging to construct, but it's only one small part of a subway system. We'll look at the other components in the next section.