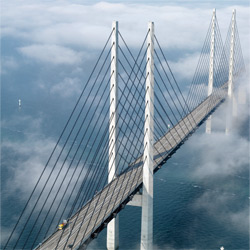 The Oresund Bridge may have been difficult to build, but the result of all that hard work was breathtakingly beautiful.
© iStockphoto/DeadDuck

Building a single-purpose bridge is a complex engineering feat. Now add other complicating factors, like a bridge to carry both trains and cars. And join that bridge seamlessly with an immersed tunnel. These were the design requirements facing engineers when they began planning how to connect Denmark and Sweden across the Oresund Strait. Their solution was one of the largest infrastructure projects in European history: the $3 billion Oresund Fixed Link [source: Lundhus].

The Fixed Link actually consists of three major parts. If you're traveling from Copenhagen to Malmö, Sweden, the first thing you encounter is an immersed tunnel 2.5 miles (4 kilometers) long. Back at sea level, you emerge from the tunnel onto Peberholm, a Danish artificial island built from material dredged up during construction. After Peberholm, you access the final leg of the Fixed Link, a cable-stayed bridge stretching for 5 miles (8 kilometers) and ending on Swedish soil.

Collectively, the Oresund Fixed Link is a miracle of modern engineering. It is the world's longest cable-stayed bridge for both road and railway [source: Oresund Bridge Web site]. Its towers are 669 feet (204 meters) high and provide a navigational clearance of 187 feet (57 meters) under the main span. The bridge features two levels, with the railway running along the lower deck and the roadway on the upper.

Luckily, Oresund Bridge builders didn't have to deal with earthquakes and other seismic activity during construction. The engineers in charge of the next bridge on our list weren't so lucky.