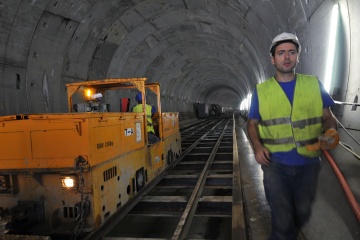 The European and Asian sides of Istanbul were finally joined after the completion of the Marmaray in 2013. A bonanza of archaeological findings repeatedly delayed the massive construction project.
© Claudia Wiens/Corbis

When digging into any extraordinary construction project, a few questions immediately poke their heads out of the sand: Which proposal ranks as the biggest, the deepest or the most hazardous to build? With underwater tunnels, these questions defy simple answers. Cities and countries constantly commission new projects. As for vital stats, the devil is between the details and the deep, blue sea.

For example, the Seikan Tunnel connecting the Japanese islands of Honshu and Hokkaido currently holds the record for the longest and the deepest underwater rail tunnel. Japan began planning it after a 1954 typhoon sank five ferry boats in the dangerous Tsugaru Strait, killing 1,430 people [sources: WGBH].

As far as the Turks are concerned, both tunnels are all wet compared to their $3.3-billion Marmaray Tunnel finally open to the public in 2013. Its 8.25 miles (13.2 kilometers) of railroad passage -- including a 4,600-foot (1,400-meter) stretch across the Bosporus seafloor -- connect Istanbul's Asian and European halves, making it the first rail tunnel to connect two continents [sources: Sweeney; Wise].

What's so great about a sub-mile undersea tunnel compared to the multi-mile Seikan and Channel tunnels? It's a difference of approach: Whereas its predecessors respectively blasted and bored passages through solid rock, the Marmaray Tunnel was assembled, piece by piece, in a trench along the Bosporus' bottom, which makes it the longest and deepest immersion tunnel ever built. Engineers chose this solution, which employs preassembled sections connected by thick, flexible, rubber-reinforced steel plates, to better contend with regional seismic activity [sources: JR-Hokkaido; Sweeney; Wise].

Between immersed tunnels like Marmaray and Øresund, and bored tunnels like the Chunnel, we've just about covered the waterfront. But let's delve a little deeper into each and examine another tunneling method used since the early 19th century.

You Call That a Tunnel?

A tunnel is technically a passage dug entirely underground. Many of the subterranean tubes that we consider tunnels -- subways, sewage and water lines -- are technically conduits because they involve temporarily removing overlying materials. Tunnels are dangerous, tedious and expensive to build, so when dealing with loose dirt and relatively shallow projects, engineers often choose this cheaper and more effective cut and cover approach [sources: Lane; Hewitt].