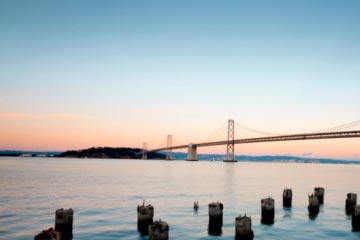 The engineering obstacles of building such a giant bridge prevented the Bay Bridge from becoming a reality for another 50 years. In the 1920s, when automobile traffic gave San Francisco and Oakland residents yet another reason to create a bridge connecting the two cities, the project gained more traction. Finally, in 1929, the California Legislature set up a project to govern the construction of a San Francisco-Oakland Bay Bridge.

The Bay Bridge wasn't the only massive undertaking the city of San Francisco was considering in the 1920s. Plans for the Golden Gate Bridge connecting the city to Marin County began in the early 1920s, but actual construction on the 1.7 mile suspension bridge didn't begin until 1933. Meanwhile, an even more ambitious project -- the Bay Bridge -- was also underway, combining a suspension span, the largest bore tunnel in the world, and a cantilever span into one giant bridge 4.5 miles long.

The California Toll Bridge Authority was tasked with the monumental challenge of planning and building the Bay Bridge. While the Golden Gate Bridge was able to use a suspension design to span over one and a half miles of water, the Bay Bridge couldn't use such a design. The distance between San Francisco and Oakland was too great. Thankfully, Yurba Buena Island jutted out from the bay and provided a halfway point between the two shores. But the distance between San Francisco and the island was still two miles. Instead of building a single suspension bridge between the city and the island, the architects built two, supported by a massive center anchorage made of concrete. The center support settled into the bay 220 feet below the water line [source:DOT.ca.gov].

With the central support in place, the western span of the Bay Bridge was constructed using a suspension design connecting San Francisco and Yerba Buena Island. The eastern span called for an entirely different design. The bridge from Yerba Buena to Oakland was built using a cantilever truss system with a bridge pier sunk to 242 feet below the water line. Connecting the two was a challenge in and of itself: The two bridges were joined in a tunnel cut through Yerba Buena Island. And not just any tunnel -- at 76 feet wide and 56 feet tall, the Yerba Buena tunnel is the largest diameter bore tunnel in the world. It runs more than 500 feet long [source:DOT.ca.gov].

Construction of the Bay Bridge began in July 1933 and the bridge was opened for traffic in November 1936, about six months before the Golden Gate Bridge was completed and made operational. Overall, the project cost $77 million, which was paid off from tolls collected on the Oakland side of the bridge. 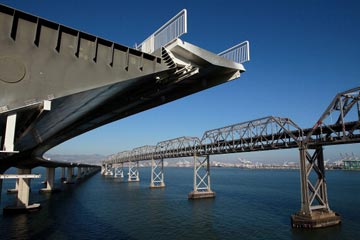 A new eastern span of the Bay Bridge is under construction.
©Justin Sullivan/Getty Images

One person died on the Bay Bridge in 1989 due to damage caused by the Loma Prieta earthquake [source: SFMuseum]. Since the earthquake, both east and west spans of the Bay Bridge have been refitted to protect against future damage from seismic activity. The eastern span is being replaced altogether with a new bridge, to be completed in 2013. Because engineers were concerned the current span would be susceptible to major damage from another earthquake, the new eastern stretch of the Bay Bridge will be able to sustain an 8.5 magnitude quake.