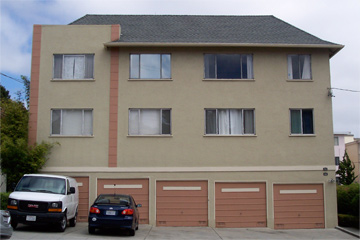 On Jan. 17, 1994, a magnitude-6.7 earthquake struck the Los Angeles neighborhood of Reseda. The Northridge Earthquake, as it came to be known, brought national attention to a fundamental structural flaw that plagues thousands of buildings located in some of America's most earthquake-prone cities. As the temblor rattled the city, the bottom floor of the Northridge Meadows apartment complex collapsed beneath the two floors above it. Sixteen residents, all on the first floor, died as a result [source: Reich]. Why did the complex collapse when so many other buildings remained standing? Because Northridge Meadows was a soft-story building.

Soft-story buildings, so called for having first stories much less rigid than the stories above, are particularly susceptible to earthquake damage because of large, unreinforced openings on their ground floors and in their typically wood-frame construction. These openings often accommodate parking spaces, large windows and expansive lobbies in residential and retail buildings. Without proper design, such structures are much less able to withstand the lateral forces -- forces that push a structure side to side -- that earthquakes generate. Once the first floor folds, the upper floors pancake down on top of it, crushing anything underneath.

What can be done to prevent such a disaster? That's where structural engineers like Dr. Scott Adan come in. Founder and principal of Adan Engineering, he specializes in a process known as soft-story seismic retrofitting.

"Lateral stiffness and strength are the key ingredients to make buildings 'earthquake safe.' In a soft-story building, the lateral components were either never considered or they are just not strong enough to resist the imposed earthquake forces," explains Adan.

Soft-story seismic retrofitting addresses those oversights, adding the structural components needed for buildings to remain standing after an earthquake hits. Read on to find out how the process works and how cities are encouraging building owners to make these improvements. 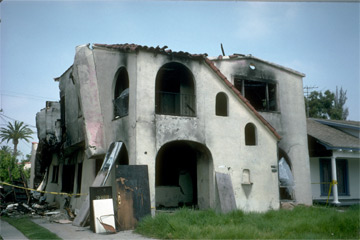 Buildings with multiple unsupported openings on the ground floor can be in trouble when an earthquake rolls into town. This California house faced some serious reconstruction after the 1994 Northridge earthquake.
Photo courtesy FEMA News

The first steps in any soft-story seismic retrofitting are analyzing the structure and determining the best way to strengthen the property. Structural engineers and contractors have to weigh several factors when deciding the best way to approach such a project. Not only do they have to ensure the building will meet the structural standards required of retrofitted buildings, but they also have to minimize the impact on the building's functionality. As easy (and potentially unsightly) as it might be to reinforce buildings by filling their ground floor parking spaces with braces or walling over their picture windows, both city zoning laws and wary building owners ensure that's not an option. Instead, engineers and contractors typically use a few different approaches to complete a soft-story seismic retrofit.

"One can strengthen existing walls, add new 'shear walls' or add a steel frame in the soft areas of the building," says structural engineer Adan. To strengthen existing walls, finishes like drywall or stucco are replaced with sturdier plywood. Anchoring walls to the foundation is also part of the process. Adding shear walls -- walls built for the sole purpose of adding lateral stability -- can also be very effective, provided they don't interfere with the structure's function. If they do, a steel frame may pose the best option, though such frames may be more expensive and dangerous to install (thanks to the fire hazard and noxious fumes generated from welding them into place) than other techniques.

Rather than making buildings earthquake-proof, retrofitting aims to make them earthquake-safe, meaning that they'll still be standing when the shaking stops. Adan is quick to point out that, even with these improvements, retrofitted buildings still won't meet the structural standards of modern construction.

"In most cases, the [International Code Council] Guidelines for the Seismic Retrofit of Existing Buildings require that soft-story retrofits provide at least 80 percent strength of the level above (the vulnerable story) and that the retrofitted stiffness be approximately 60 percent of that required for new construction," he says.

We'll get into how much retrofits cost next.

How Much Will That Retrofit Run Me?

The cost of a soft-story retrofit varies greatly depending on the scope of the project, but a large building can cost upward of $100,000 to retrofit in some cases [source: Selna].

Clearly, soft-story seismic retrofitting isn't cheap, but it can be money well spent. A Caltech survey found a 7:1 benefit-to-cost ratio for money spent on shear walls and a 4:1 ratio for money spent on steel frame retrofits [source: Association of Bay Area Governments]. Still, building owners often don't want to deal with the hassle and expense of the process, so cities are adopting a variety of approaches to encourage or, in some cases, even require owners to retrofit their buildings.

In Berkeley, for instance, owners of soft-story buildings must have their buildings assessed for structural weaknesses. Whether they then choose to rectify those weaknesses is up to them, but if an owner decides to forgo the expense, he or she must post a warning informing all residents and guests that the building is likely unsafe in the event of an earthquake. Other cities encourage retrofits by waiving zoning requirements for parking and other building codes, providing tax incentives or preventing building owners from performing other renovations or improvements until they've first retrofitted their building. Going further, cities like Fremont simply call for owners of soft-story buildings built before 1978 to retrofit them or face heavy fines [source: Community Action Plan for Seismic Safety]. Hopefully, policies like these, rather than another earthquake, will bring much-needed attention to the issue of soft-story retrofitting.

Keep reading for more earthquake links that will rattle you.

In California, the sheer scale and number of soft-story, wood-framed, multifamily, residential structures dwarfs that of other seismically active regions, says Adan, the structural engineer. Why? Following the great 1906 earthquake and fire, much of San Francisco was rebuilt, mostly out of the abundant supply of locally available timber. This soft-story building boom has no international precedent, explains Adan. Other areas of California followed suit in the post-war population and construction booms, periods when the earthquake risks were not that well understood and building codes did not typically address the threat.

How the U.S. Army Corps of Engineers Works
Artificial Intelligence Is Getting So Smart, We Need It to Show Its Work
Pee-resistant Paint: Coming to a Train Station Near You