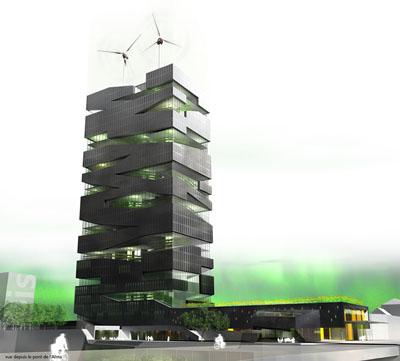 By 2050, it's estimated that 80 percent of the world's people will live in urban areas (currently, 60 percent do). The population will have increased to about 9.2 billion, much of it in the developing world [Source: New York Magazine]. Many experts contend that unless drastic measures are pursued, the world could face dramatic shortage in both food and arable land. Famine and ecological catastrophe are among the possible dire consequences.

Enter vertical farming -- farming in skyscrapers several dozen stories high. Dr. Dickson Despommier, a professor of public health and microbiology at Columbia University, developed the idea with contributions from his students. Dr. Despommier claims that vertical farms could do more than just solve future food shortages. They could also stave off global warming, raise standards of living in the developing world and change how we get our food and dispose of waste. It may sound far fetched, but vertical farming is actually a very real possibility for the future.

The key to vertical farming is space. The Vertical Farm Project, led by Dr. Despommier, claims that one indoor acre of farming is equal to 4 to 6 outdoor acres [Source: The Vertical Farm Project]. They cite a farm in Florida that was converted into an indoor hydroponic farm where strawberries grow in stacks. That farm now grows the equivalent of 30 acres of strawberries in a one-acre greenhouse.

By converting from "horizontal farming" to vertical farming, humanity would never have to worry about running out of arable land. By operating indoors, crops could be grown all year, free of concerns about bad weather, drought or natural disasters. If the building is sealed and carefully monitored, there would be no need for pesticides to eliminate invasive insects or parasites, a particularly devastating problem in the developing world. All food would be organically grown without fertilizer and free of disease. Vertical farmers wouldn't have to worry about conflicts over land, water and other natural resources or contend with genetically modified foods, unwanted strains of plants or wandering animals.

These farms would also be located in the urban areas where most of the Earth's population will be living. The result is that agriculture becomes more of a closed system -- food is grown, transported, eaten and waste disposed of all in the same metropolitan area. In a major city like New York City, where almost all food must be flown or trucked in from miles away, the difference is tremendous. Vertical farming would largely eliminate the pollution generated as food is trucked, shipped and flown across countries to reach its desired markets.

Because vertical farms would exist in the communities they serve, crop selection could be altered to fit the local community. It's the culmination of an idea that's been gaining a lot of popularity lately and that's been chronicled in a host of books and articles: buying food from local farmers (within 100 miles or so of home) in order to support local growers and reduce one's ecological impact.

Finally, there's what might be the most enticing benefit: land that has been used for horizontal farming could become forests again. The result would be a major counterweight to global warming. Deforested areas could be returned to their natural states, replenishing plant and animal species, reducing CO2 in the atmosphere and providing beautiful park and woodland spaces for recreation and tourism.

The possible benefits of vertical farming are clearly numerous and dramatic, but what would a vertical farm look like, and would it work? Let's take a look on the next page. 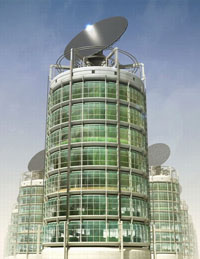 For more information about vertical farming and other related topics, and to watch a video showing a vertical farm design, please check out the links on the next page.