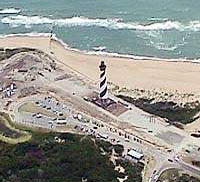 Because barrier islands are popular vacation spots, many are being developed. Resort communities are being built on them including high-rise hotels, condominiums and golf courses. To accommodate these structures, sand dunes are destroyed and salt marshes and barrier flats are filled in. In some cases, humans have tried to fight the natural erosion processes on barrier islands, with mixed results. Let's look at two examples.

Barrier islands such as Hatteras Island, NC, where the Cape Hatteras Lighthouse is located, are constantly changing. Offshore currents carry sand away from one end of the island and deposit it at the other end, thereby changing the shape of the island.

The Cape Hatteras Lighthouse has guided mariners since the 1800s. Because of the eroding beach around it, the lighthouse was in danger of falling into the Atlantic Ocean. In 1989, officials decided to move the lighthouse from the site where it had stood for over 100 years to a new site inland about 2900 feet (about .5 mile/.8 km). Years of reports, studies and public hearings delayed the move until 1999. The move presented many technical challenges which are described in various press releases and articles at Cape Hatteras Lighthouse Relocation Articles and Images.

In the next section, we'll look at some dramatic effects that development has had on barrier islands.