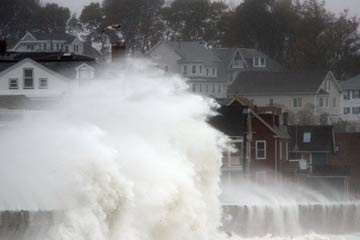 Don't like the weather? If you're in the U.S., simply migrate a state or two away and you'll find yourself in an entirely different weather system. The West Coast has torrential rains. The Midwest has blizzards. And the Southern Plains have tornadoes. But the East Coast sometimes receives all three -- in the form a nor'easter.

A nor'easter is a type of massive cyclonic storm that forms within 100 miles (160 kilometers) of the United States' East Coast, traveling inland into the New England and Mid-Atlantic regions and reaching northward to the Atlantic-facing side of Canada. Also called "northeasters," these storms take their name from the strong and continuous northeasterly winds that blow them ashore.

Although nor'easters can occur any time of year, they are most frequent from September to April. In the winter months, a nor'easter can be especially dangerous. It draws cold air from the Arctic air mass, which then collides with warm air from the oceanic Gulf Stream that acts as fuel for the nor'easter. This difference in temperatures turns a nor'easter from an inconvenience into a dangerous storm that introduces frigid temperatures, coastal flooding, hurricane-force winds, blizzard conditions and occasional tornadoes into one of the nation's most populated areas [source: NOAA].

The Mid-Atlantic and New England regions are crowded with cities -- Washington, D.C., Baltimore, Philadelphia, New York and Boston -- known for their influence, whether by resident populations, Wall Street transactions or political machinations. Nor'easters can affect these cities' inner workings; for example, causing Wall Street to shutter in October 2012 for only the second time in a century [source: Schaefer].

The Mid-Atlantic and New England areas also are home to 180 counties that line the East Coast, and during a nor'easter, they become prime targets for beach erosion, flood and property damage [source: NOAA].

If you ever experience a nor'easter, or listen to first-hand accounts of one, there's one element you're sure to encounter: wind. And lots of it.

A nor'easter, which can stretch for thousands of miles, forms in an area of low pressure over the warm waters of the Atlantic Ocean. In the beginning, it looks similar to a hurricane, thanks to an eye in the center of its low-pressure system. However, as the nor'easter tracks an oceanic route offshore of the East Coast, the storm's already cool core experiences a drop in temperatures at higher levels of the troposphere (the lowest layer of the atmosphere, which reaches from the earth's surface to 11 miles or 17 kilometers skyward) and leaves its hurricane-like roots behind. Hurricanes rarely reach the Mid-Atlantic or New England region, while nor'easters are known for making landfall almost exclusively in the area [source: The Weather Channel].

And this is where the winds come in. Northeasterly winds can, and often do, alter the trajectory of a nor'easter. Instead of heading out to sea, these hurricane-force winds cause nor'easters to turn their fury inland. Depending on where the storm reaches the coast, it will produce rain, snow or a mixture of the two types of precipitation. If northeasterly winds direct the storm to hit west of New York City or Boston, it will likely bring rain. If it flows to the east of these cities, snow or sleet is usually expected [source: The Weather Channel].

A nor'easter can even come on the heels of a hurricane. In October 2012, in the wake of Hurricane Sandy, a nor'easter rattled the East Coast where it dampened efforts to restore power and aid victims [source: Edwards].

Why nor'easter and not northeaster?

It's unclear whether dropping the letters "th" in "northeaster" is a regional affectation or a legacy term used in maritime compass reading. Despite the best efforts of those who wished an end to the contraction, including the late Maine resident Edgar Comee, it remains a popular term. Whenever Comee came across a "nor'easter," whether televised or printed, he fired off a postcard of complaint. According to Comee, a retired Navy sea captain, "the use of a nor'easter to describe a northeast storm is ... the odious, even loathsome, practice of landlubbers who would be seen as salty as the sea itself" [source: McGrath].

Every year, a slew of tropical cyclones (many of which evolve into full-fledged hurricanes) receive new monikers from NOAA's National Hurricane Center. Six lists of hurricane names are rotated and approved by the World Meteorological Organization. The organization, headquartered in Geneva, Switzerland, relies on an international voting committee to retire the names of particularly devastating storms, such as Hurricane Katrina in 2005, and appoint new names to replace them [source: World Meteorological Association].

But don't expect the same name recognition to be given to nor'easters. Although the Weather Channel began calling an October 2012 nor'easter that erupted on the heels of Hurricane Sandy "Athena," few others followed suit. In fact, the National Weather Service refused to recognize the storm's name and ordered its staff not to use the term in its coverage. Many media, including The Associated Press, didn't name the storm in their coverage, either [source: Sistek].

Despite the confusion about whether a private U.S.-based entity (the Weather Channel) should be naming storms without the buy-in of a global weather community, one thing's for certain: Even without a name, a nor'easter can cause widespread and memorable damage.

Take the Great Blizzard of March 1888, for example. Ushered in by a powerful nor'easter, this storm settled over New York, New Jersey, Massachusetts and Connecticut for two days, and dropped up to 50 inches (127 centimeters) of snow. The unseasonably late storm literally buried about half of its 400 victims in snowdrifts that piled up between downtown buildings. It snapped telegraph poles. It shut down rail lines and trapped passengers in rail cars for days. And in the months that followed, the storm did something else, too. It prompted New York City's officials to design and build an extensive subway system. It also led to buried telegraph and electrical lines [source: Burt].

Although the Great Blizzard of 1888 is still part of the U.S.'s weather-disaster lexicon, there have been at least a dozen other notable nor'easters since that storm made its snowy mark on history. For instance, "The Perfect Storm" of 1991 which damaged or destroyed 1,000 homes. (A movie was made about it later). And, with as many as 40 nor'easters expected to fire annually, odds are we'll see another big one in the not-too-distant future.

The accounts of the Great Blizzard of 1888 astound me. Pedestrians in downtown New York City buried in drifts. Commuters who never made it home. Others who walked across the East River, which had frozen solid. This legendary nor'easter was also one of the first captured in photographs. Black-and-white snapshots documented the storms' aftermath and offer a modern-day illustration of the disastrous storm that left more than 400 dead. While I don't wish for a storm of that magnitude (50 inches of snow!) to silence any part of the world, I don't mind witnessing a few snowy drifts now and again.