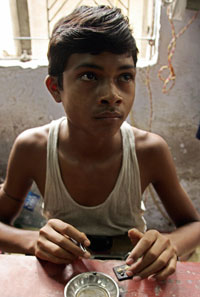 If you've ever shopped for a diamond, you know that weighing the 4 Cs is hard enough without having to think about the diamond trade. But ethically speaking, a diamond's origins can be your most important consideration. Perhaps the biggest controversy facing the diamond trade today is conflict diamonds. These stones are also known as blood diamonds because of the blood shed to obtain them.

A conflict diamond has been stolen or illegally mined and then sold to raise money for rebel militia or terrorist groups. These groups earn money for weapons by forcing men, women and children to dig for diamonds. Anyone who protests is killed or threatened by having a limb cut off. Most conflict diamonds come from Angola, the Democratic Republic of the Congo, the Ivory Coast, Liberia and Sierra Leone. If you don't shop carefully, you could be buying one of these stones.

Conflict diamonds are smuggled into the diamond trade along with legitimate diamonds. The United Nations (UN), the Conflict Free Diamond Council and other groups are working toward better regulation so that conflict diamonds don't make it to the market. These groups have instituted the Kimberley Process, which monitors and certifies a diamond at every point of its production process. Because of the Kimberley Process, the UN estimates that 99.8 percent of diamonds on the market now are conflict-free [source: National Geographic]. Before you purchase a diamond, you can request to see its conflict-free certificate -- in the future, the UN will also require diamonds to have laser engraving and optical signatures, and to be entirely produced within a single country.

Conflict diamonds are not the only controversy darkening the diamond trade: human- and animal-rights issues run rampant in India as well as certain countries in Africa. In some African countries, miners use children to dig in tight, underground spaces where men and woman can't fit, even though child labor is illegal. The mining towns in these African countries also have steadily increasing murder and HIV infection rates as a result of trespassing and sex trade. In India, where 92 percent of the world's smaller diamonds are cut, children are given the smallest stones to work with because their eyes and fingers are better suited for seeing and shaping tiny facets [source: MSN]. Severe eyestrain, repetitive motion injuries and lung infections from inhaling diamond dust are just a few conditions that affect these workers.

Animal-rights activists have just as much at stake in diamond industry regulation as human-rights organizations. According to the Animal Welfare Institute, African primate populations are dwindling -- in 15 to 20 years, apes will become extinct. The chimpanzee population has declined to only 150,000, and with 600 gorillas being poached yearly, they're facing extinction as well. The dwindling primate population may be partly attributed to poaching, but not all poaching is for s­port. Some hungry diamond miners with no other food source depend on these animals for survival.

Next, we'll delve into diamond history to learn about the discovery of some truly extraordinary diamonds.

Hungry miners aren't the only ones poaching. In non-African countries, bushmeat is considered a delicacy and is a profitable product. Bushmeat includes bonobo apes, chimpanzees, duikers, elephants, giant pangolins and gorillas. Up to 10 tons of this exotic meat is smuggled through London's Heathrow Airport daily [source: Animal Welfare Institute].