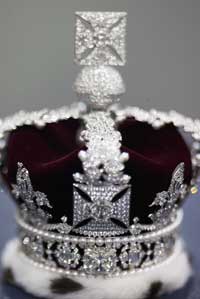 Cullinan II, the Lesser Star of Africa, was cut into many smaller diamonds that are in the Imperial State Crown.
Photo Courtesy Getty Images

The world's most famous diamonds are its largest diamonds. At staggering weights up to thousands of carats, these diamonds have been cut, re-shaped and sold many times, contributing to their rich, interesting histories. Despite diamond's natural, clear brilliance, some of these stones have a dark side.