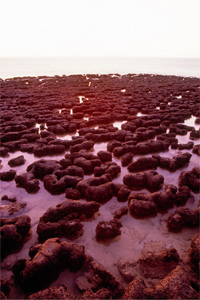 When it comes to fossils, specimens like Sue the Tyrannosaurus rex grab much of the attention. Not only is Sue the most complete T. rex ever found, she's also a staggering 67 million years old. Compared to the oldest fossils ever found, though, Sue is the new kid on the block [source: Field Museum]. Some of those ancient fossils, known as stromatolites, are more than 50 times older than Sue -- 3.45 billion years old, to be exact [source: University of Munster].

It's hard for us even to fathom such an incredible length of time, but J. William Schopf, the paleobiologist who first discovered the fossils in 1993, helps put things in perspective in his book "Cradle of Life: The Discoveries of Earth's Earliest Fossils." If the entire history of Earth were compressed into a 24-hour day, Schopf says, humans would have arrived within the last minute of that day. In comparison, stromatolites would have been around for more than 18 hours. Perhaps even more amazing is the fact that stromatolites continue to form till this day.

Unlike fossils such as dinosaur skeletons, stromatolites were never part of a living organism. Rather, stromatolites develop much the same way a cast is taken of a statue, preserving the shape of, but not containing, a given object. In the case of stromatolites, the "cast" is composed of thin layers of sediment and calcium carbonate -- the same substance that forms limestone -- that build up around complex colonies of cyanobacteria (aka blue-green algae) and other single-celled organisms. Stromatolites form very slowly, preserving a record of thousands of years of life in the process. Fortunately, stromatolites from every geological period still exist. By carefully dissecting and exploring these structures, scientists have access to some of the only remaining clues about what the first life on Earth was like.

After the Earth first formed nearly 4.5 billion years ago, it was entirely uninhabitable. In fact, the Earth's surface was a molten rock for perhaps the first 800 million years of the planet's existence, not exactly the best environment to call home [source: Waggoner]. After the Earth's surface cooled and solidified into continental plates, the first microorganisms appeared. Among the most significant of these were cyanobacteria, which thrived in basins of shallow saltwater where they were protected from the sun's intense rays but were still close enough to the surface to depend on the sun for photosynthesis. Over time, an amazing variety of stromatolites formed around these colonies of cyanobacteria and other early life. In fact, the astounding complexity of these structures provides the best evidence that the structures were once teeming with life; they simply couldn't have formed otherwise. Somehow, even the oldest of these structures improbably weathered billions of years of geological turmoil before Schopf discovered them in Western Australia in 1993.

The discovery of these particular stromatolites was tremendously important for numerous reasons. When Darwin first proposed the theory of evolution, he recognized that gaps in the fossil record presented serious threats to his claim that all life came from the same distant ancestors. Technology was simply too limited at the time to even find, much less identify, fossils dating back more than several million years old at the time, and for more than 100 years, things stayed that way. Some thought evidence of the so-called "missing link" between life as we know it and the earliest life forms would never be discovered, perhaps having been destroyed over eons of violent earthquakes and erosion.

Schopf's discovery, however, changed things. Biologists finally had conclusive evidence of both when and what types of life first inhabited the Earth, and because of this understanding, scientists now have a much better idea of how life evolved. For instance, Earth's atmosphere during the Archaean period, when cyanobacteria and other life first appeared, was composed of methane, ammonia and gases that would be toxic to most life today. Scientists now believe that organisms like cyanobacteria were responsible for creating oxygen through anaerobic respiration. Who knows what other keys stromatolites hold to our understanding of ancient Earth?

Unfortunately, although stromatolites still continue to grow in a few places like Yellowstone National Park and areas of the Bahamas, they are much less common today. If we can't protect these amazing formations, we could lose one of the planet's most diligent and accurate record keepers forever.

6 Tough Facts About Titanium
How Landslides Work
How England Broke off From Mainland Europe 450,000 Years Ago