by Robert Lamb Sep 29, 2017
A saber-tooth mom grooms her cub in this artist's illustration called "Survival of the Cuddliest." Psithyrus/Deviant Art

Saber-tooth kittens weren't fat; they were big-boned — and now we have the science to prove it.

If you've ever so much as touched a book about prehistoric mammals, then you know the saber-tooth cat (from the genus Smilodon) and its signature canine teeth. As Douglas J. Emlen points out in his book "Animal Weapons: The Evolution of Battle," S. fatalis was smaller than a modern lion but twice as heavy. It even outweighed other Pleistocene wild cats, such as the American lion (Panthera atrox). As such, these 600-pound (272-kilogram) cat-tanks probably depended on ambush tactics, leaping on the backs of lumbering prey animals such as young mastodons.

But what about saber-tooth kittens? Were they as massive and heavily framed as their parents? Scientists were unsure whether S. fatalis entered the world thick-boned or developed its robust skeleton as it matured — until now.

In a study published on Sept. 27 in PLOS ONE, California State Polytechnic University's Katherine Long and colleagues analyzed hundreds of S. fatalis and P. atrox bones in the La Brea Tar Pits museum. Contrary to their expectations, the researchers found that baby saber-tooth cats were born thick-boned. They experienced more typical wild cat growth, with their already thick bones growing longer and slenderer as they matured.

This collection of juvenile limb bones of Smilodon fatalis shows how dramatically the bones changed in size and shape during the young cat's development. The tibia bones are on display in series A while the femora bones are seen in series B.
DRP

So there you have it. Despite their unique and fearsome appearance, saber-tooth cats weren't that different from their feline relatives, at least as far as growth and development are concerned. Would they have also loved cardboard boxes and distrusted cucumbers? Sadly, such questions will have to remain a mystery.

Boston, New York, Texas: The Origins of These and Other Great American Accents

Jellyfish Don't Have Brains, But They Still Sleep 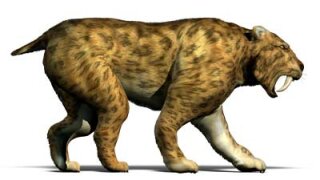 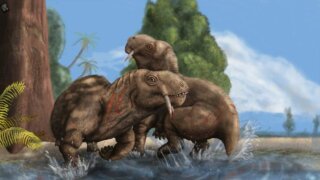 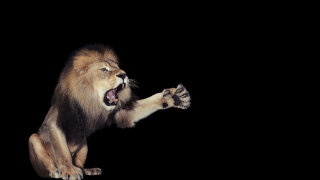 Is there such a thing as a man-eating lion?