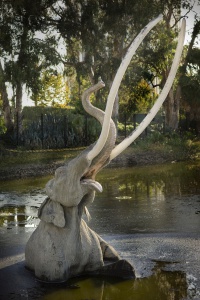 A sculpted mammoth shows visitors at the La Brea Tar Pits what these ancient animal accidents may have looked like.
Mark Harris/The Image Bank/Getty Images

Serious scientific excavations didn't commence at the La Brea Tar Pits until the beginning of the 20th century, but the history of the pits stretches back long before that. It all started millions of years ago when the area we know of today as Los Angeles was submerged underwater. Marine life and sediments accumulated on the ocean floor and eventually the pressure converted the organisms' remains into fossil fuels. Once the ocean receded, that petroleum started seeping its way to the surface -- all beginning about 40,000 years ago.

The tar in the pits, which is more correctly referred to as asphalt, is what's left over after the lighter components of petroleum evaporate away. Incredibly sticky, especially in warm weather, the asphalt has the adhesive power to entrap even large animals. Of the fossilized remains of mammals that have been pulled from the pits, about 90 percent are carnivores [source: The Natural History Museum of Los Angeles County]. This has led the resident paleontologists to suspect events at Rancho La Brea often played out like this: Prey animals, especially weakened or injured ones, would become trapped in the pits. This would draw large numbers of predators to the scene, where they would often become ensnared as well.

The last census of the La Brea collection took place in 1992, and the results were impressive. At the time, the museum housed more than 3.5 million specimens representing more than 600 plant and animal species [source: The Natural History Museum of Los Angeles County]. Excavations have continued apace since then, and experts at the museum suspect the work on something called Project 23 could potentially double the number of specimens in the collection.

We'll talk more about Project 23 on a later page, but for now, let's look at the tar pits' history.

The History of the Tar Pits

Fossil fuels were used by human populations long before the Industrial Revolution, and that includes the asphalt found in the La Brea Tar Pits. For example, Native American tribes used asphalt from the pits to waterproof everything from canoes to baskets.

When the Spanish later occupied the area, they used the land for cattle ranching. It was eventually sold to the Hancock family in 1870, and they drilled for oil. A few studies and small-scale excavations followed, but it wasn't until after the turn of the century that things really started heating up. In 1913, the Natural History Museum of Los Angeles County (known by a slightly different name at the time) was granted access to the lands, and it initiated an intense two-year investigation that uncovered a large portion of the specimens in the collection today. Ninety-six pits were dug during the course of those excavations, but the working conditions were unsafe and the efforts were haphazard. For example, only bones belonging to larger animals received much attention, while smaller fossils, like those of plants and invertebrates, were often overlooked.

A man named L. E. Wyman led those first major excavations, but it was paleontologist Chester Stock of the California Institute of Technology who would do most of the early research work on the recovered remains. Some of the pits proved more bountiful and provocative than others, and some of the most captivating finds came from Pits 3, 4, 9, 61 and 67. But it was Pit 91 that proved to be the real star of the show over the years and has been excavated on and off ever since. More on that on the next page.

A Family of Museums

The Page Museum at the La Brea Tar Pits is part of a trio of institutions that also includes the Natural History Museum of Los Angeles County and the William S. Hart Park and Museum. The Page Museum is located in Hancock Park, which is named for George Allan Hancock, the man who donated the 23 acres the park resides on.

Of those 96 pits we discussed on the last page, the most famous and the most actively dissected has to be Pit 91. In fact, for nearly 40 years, it was the only pit under excavation at La Brea. In the late 1960s, researchers at the pits opted to enhance their excavation technique by harvesting all the fossils available in the pit, not just those that belonged to large vertebrates. Having a broader fossil record would offer a more complete picture of the end of the Pleistocene Epoch.

And so on June 13, 1969 -- a day affectionately referred to as "Asphalt Friday" -- excavations recommenced, only this time the remains of amphibians, reptiles, insects, small birds, shells and plants were among the specimens meticulously collected by diggers. And along with those important, if less flashy fossils, Pit 91 has also offered up a whole host of better-known players of the Pleistocene. These include bones from dire wolves, sabertoothed cats, western horses, ground sloths and mammoths -- and the pit is only about 15 feet (4.5 meters) deep!

The vast majority of these remains have been radiocarbon dated to between about 10,000 to 40,000 years old, and Pit 91, like most of the pits, contains fossils from a broad span of time. Thirty-thousand years is a long stretch of time for animals to become entrapped, but fossil figures in the millions can still be a little surprising. However, researchers say the numbers make sense; based on what they've found in the pits, it would only have taken about 10 large animals every 30 years to provide the wealth of fossilized remains found to date. If an entrapment event like that happened once every decade, that would mean the number of specimens found so far is more than explained.

Work on Pit 91 is currently on hiatus, however, and that's all because of the accidental discovery of what has been codenamed Project 23.

The George C. Page Museum of La Brea Discoveries, or the Page Museum as most people know it, was envisioned and planned largely by its namesake. A prolific philanthropist, George Page donated money to fund the construction of several buildings aligned with institutions such as universities and children's hospitals, but no project captured his heart quite like the establishment of a museum dedicated to honoring and preserving the artifacts of the tar pits. The museum took three years to construct and officially opened on April 15, 1977. 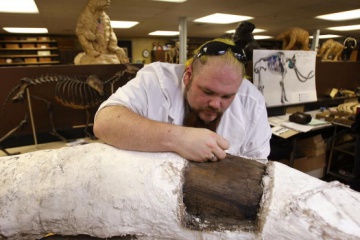 In 2006, Project 23 began with all the glamour of a parking deck. The Los Angeles County Museum of Art (LACMA) intended to construct a new underground parking garage on land adjacent to the tar pits, but being such a historically important area, that sort of work couldn't take place without a salvage archaeologist. And that was a good thing, too, because during the course of construction, 16 deposits chock full of artifacts were unearthed.

Not wanting to unduly delay construction (it would have taken an estimated 20 years onsite to thoroughly dig through all the deposits, and the people at the LACMA weren't thrilled at the idea of that long a wait), salvage archaeologist Robin Turner engineered a solution. Three-and-a-half months later, 23 wooden crates containing the deposits were hauled out of the earth with cranes and delivered to the Page Museum intact. Heavily wrapped in plastic and weighing up to about 125,000 pounds (55,000 kilograms), the boxed deposits were transported to the Page museum's main research facility -- nicknamed the "fish bowl" -- where the public can watch through glass walls as researchers carefully sift through them.

Probably the most exciting find of the project so far is "Zed," an 80 percent complete Colombian mammoth with tusks. Back when most of the mammoths at the tar pits were discovered, their bones were just mixed together and later put back together at random; the process was sort of like jumbling up the pieces of 30 different jigsaw puzzles and then assembling them back together without regard for which originated from which box. Now curators can delve deeper into the life of a Pleistocene mammoth than they ever have before. Microfossils abound in the matrix encasing Zed's fossils, analogous of just how many mysteries are still waiting to be unraveled at one of Pleistocene Epoch's most enigmatic legacies, the La Brea Tar Pits.