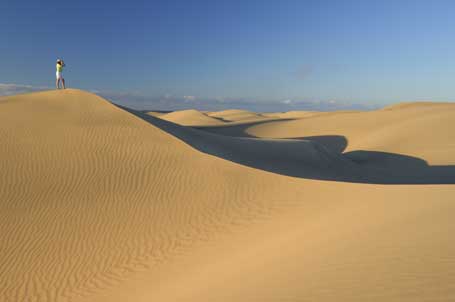 If this woman slid down the dune, perhaps it would sing for her.
Martin Ruegner/Getty Images

Just like us, sand dunes grow. A sand dune can start out as small as a few hundred grains of sand settled against a pebble. And, with the right wind conditions, it can grow to several hundred feet tall. Depending on wind direction and velocity, a sand dune can spread out to form lovely ripples and patterns.

The wind also causes some dunes to migrate. That's right -- a sand dune can actually change locations. The air must be moving at at least 15 miles per hour (24 kpm) in order to transport sand grains. The grains bounce along the ground and bump into each other, moving themselves along. As sand piles up on a dune, eventually the dune becomes so steep that it collapses under its own weight. The sand at the top begins to avalanche down the dune's slip face. Once it slides down the face, it piles up anew on the other side. In this way, a sand dune can actually roll along while maintaining its original shape. Scientists call these dunes migrating dunes, and they're still trying to understand the exact physics behind them. Because migrating dunes can creep up and eventually envelop an entire village, it's important to know how they work.

Sand dunes, like us, can also reproduce. Of course, they don't need flowers and a romantic dinner to get things started. They just need wind. As sand dunes slowly move along, sometimes they cross paths and come together in a low-speed collision. And we mean it when we say "low speed" -- a collision can take up to an entire year to occur. If a small crescent-shaped dune collides with a bigger crescent-shaped dune, the smaller one may pass through and then break into two even smaller dunes on the other side. Researchers call this process breeding. Breeding happens when the dune is unstable -- the horns at the ends of a crescent-shaped dune will simply break off to become new baby dunes.

If you're still wondering why anyone would think a sand dune is alive, look no further than the phenomenon of booming dunes. People have reported hearing sand dunes sing, croak, burp, bark and moan. How does this happen? It's actually pretty simple. The noise we're hearing is the sound of sand grains rubbing against each other. The quality of sound produced depends on the size and texture of the grains.

For sand to make loud booming or humming noises, the grains must all be similar in size, rounded, dry and free of other particles. As we mentioned before, when sand accumulates at the top of a dune, it eventually reaches a tipping point and slides down the other side of the dune in a sand avalanche. The face of the dune acts like a speaker, amplifying the sound of the grains colliding. As the sand passes over itself, it produces vibrations that result in sounds like a cello or didgeridoo. Researchers have measured the noise levels, and some booming dunes reach up to 110 decibels -- as loud as a snow blower or motorcycle!

A sand dune breaks into song on its own as these sand avalanches occur, but you can also make a desert sand dune sing by sliding down its slope. You may even have heard sand squeak under your feet as you walk on the beach -- this is the same phenomenon but on a smaller scale.

For more information on sand dunes and other formations, visit the links on the following page.