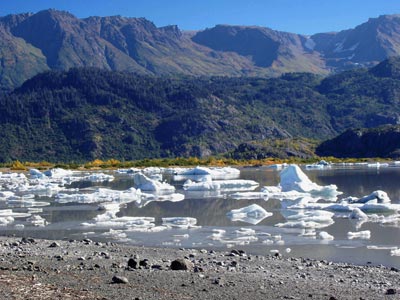 Scientists were at first puzzled out how a glacial lake like this one could abruptly disappear.
Photographer: George Wood / Agency: Dreamstime.com

Sometime in May 2007, a glacial lake in southern Chile disappeared. Chilean surveyors reported in March that the lake was its usual siz­e, 100 feet deep and covering an area around five acres. Located in Bernardo O'Higgins Park, in the southern Andes mountains, the lake is (was) rarely visited and didn't even have a name. When Chilean forestry officials arrived, they were surprised to find nothing more than "chunks of ice on the dry lake-bed and an enormous fissure" where the unnamed lake had once been [Source: The Guardian]. Five miles away, a river that was once more than 130 feet wide barely flowed. What could cause such a massive disturbance to make an entire lake and much of a river disappear?

Global warming seems to be the knee-jerk response lately whenever a dramatic environmental change is observed. Indeed, global warming is a big concern for lakes, as many bodies of water are experiencing receding water levels due to a combination of low rainfall and high temperatures. In the Magallanes province, where the lake is located, the Tempano and Bernardo glaciers are shrinking, and both of those glaciers contributed water to the lake. Experts like Gino Casassa and Andres Rivera, both glaciologists, point to global warming as the cause of the glaciers' melting. So global warming was immediately considered as a possible cause, but when investigating the lake, scientists considered several other possibilities.

One theory scientists considered was that an earthquake in the area opened a fissure in the earth, which sucked down the lake. Southern Chile experiences hundreds of small earthquakes a year, and a fairly large tremor was detected on April 21. The fissure observed in the empty lake bed could have provided an outlet for the lake water to escape, much like a stopper being pulled from a sink.

A second possibility draws in part on global warming and the melting of glaciers. Glacial lakes often develop behind natural dams, which are made of ice or a pile of rock and earth debris a glacier leaves behind (called a moraine). Once the dam is broken, whether by an avalanche, earthquake, warming or other event, water bursts through and the lake sometimes drains.

It took scientists several weeks before they were able to discover the answer because the site is very remote -- about 4,900 feet above sea level and 1,250 miles south of Chile's capital, Santiago. But in early July 2007, scientists got their answer.

An investigation has revealed that too much water was the problem. The melting Tempano and Bernardo glaciers filled the lake beyond the crater's capacity. The increased pressure broke the lake's moraine through which water flowed out, later ending up in the ocean. The lake is refilling as the chunks of ice on the lake bed melt, though Chilean scientists pointed out that global warming did have a serious effect. Glaciers naturally melt and reform, but warming is causing the Tempano and Bernardo glaciers to melt more than they should.

For some lakes, rapidly appearing or disappearing is part of a natural process. The lake in Chile did not exist 30 years ago, though, again, global warming is likely affecting the process. Some lakes, including many in Alaska and Florida's Lake Jackson, go through a similar process regularly, disappearing and reappearing during certain seasons, or from year-to-year or decade-to-decade.

This sinkhole is one of two that cause Florida’s Lake Jackson to drain at least every 25 years.
Image used in the Public Domain

While many bodies of water undergo natural cycles of disappearance and reemergence, several industrial disasters have also made lakes disappear or appear. Louisiana's Lake Peigneur represents one of the most infamous of these cases. In 1980, Lake Peigneur was only 11 feet deep at its deepest point but spread across 1,300 acres. It featured an island with a botanical park, several oil rig platforms and salt mines deep beneath the lake.

On November 21, 1980, an oil-drilling team had difficulty removing their drill that got stuck about 1,200 feet below the lake's surface. Suddenly the drilling crew heard loud noises and their platform began tilting. Fearing a total collapse of the oil rig, the workers abandoned the platform. The platform tipped over and, shockingly, disappeared completely under the water. A violent whirlpool quickly developed where the oil rig had been. Other drilling platforms and a dock were sucked in. The direction of the Delcambre Canal, which had flowed into the Gulf of Mexico, was reversed and 11 barges and a tugboat slipped into the whirlpool. Miners in the salt mines 1,500 feet below began to evacuate when water started rushing into the caverns.

As it turned out, a miscalculation had caused the drilling team to work in the wrong spot. A small hole had rapidly expanded as the lake's fresh water flooded in and eroded the mine's salt-rich walls. Miraculously, all 50 miners got out safely and no one was killed. But a shallow, 3.5 billion-gallon, freshwater lake had suddenly disappeared. The reversed Delcambre Canal created a 150-foot waterfall of saltwater, and two days later Lake Peigneur was a 1,300-foot deep saltwater lake. Many new types of plants and wildlife appeared, and nine of the 11 barges bobbed back up to the surface after the crater was filled with saltwater. In the end, Texaco and its drilling partners paid out millions of dollars in lawsuits, but were probably protected from further damages because the catastrophic nature of the events made it difficult to figure out exactly what had happened.

The Salton Sea was created by an environmental disaster but now takes in irrigation runoff and hosts a variety of wildlife.
Photo by Geographer. Distributed under Creative Commons Attribution 2.5.

The Salton Sea in southeastern California is also the result of an environmental disaster. Before the colonization of the American West, the Salton Basin had seen some occasional, natural flooding from the Colorado River. In fact, in 1500, the area flooded to form a body of water 26 times bigger than the current Salton Sea. Later, the area was used by mining companies, set aside for Indian reservations and served as part of the ongoing battle over the region's agricultural water supply. Still, any water that flowed into the basin didn't stay around for long.

In 1905, a canal was created to divert water away from the Colorado River. But poor construction allowed water to breach the canal wall, essentially diverting the river into the Salton Basin. During 1905 and 1906, water continued to flow into the basin before the rupture was closed. The Salton Sea is now California's largest lake, home to many types of birds and fish, but it has continued to be plagued by controversy and rumors of pesticide contamination. However, repeated tests have shown those rumors to be false and massive die-offs of birds and fish are believed to have been due to a bacterial outbreak (one that poses no danger to humans). Despite these deaths, the Salton Sea continues to host many types of wildlife and to serve as a depository for agricultural irrigation runoff. A restoration project is underway to preserve the Sea's delicate ecology and to develop it as a tourist and recreation destination.

For more information about disappearing lakes, strange environmental phenomena and other related topics, please check out the links on the next page.

Do you already know everything about disappearing lakes? Prove your knowledge in the Disappearing Lake Quiz.

Could we resurrect dinosaurs from fossil embryos?
Why Is the Tropic of Cancer Important?
Mountain Heights Are Always Changing