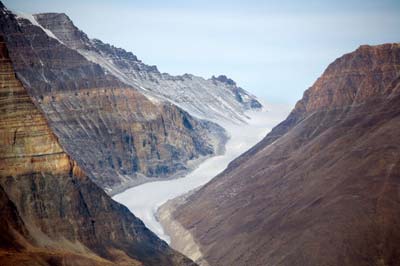 There are two types of places on Earth where glaciers form: at the north and south poles, whe­re it's always really cold; and at high elevations, such as large mountain ranges.

A glacier is basically an accumulation of snow that lasts for more than a year. In the first year, this pile of snow is called a névé. Once the snow stays around for more than one winter, it's called a firn.

As more and more snow piles up over the years, the weight of the snow on top starts to compress the snow on the bottom. This compression turns the snow to ice. It's just like taking a handful of fluffy snow and squeezing into a hard snowball, only on a huge scale. The compression of the glacier continues for dozens, hundreds or even thousands of years, adding more and more layers on top and adding even more weight. The ice eventually gets compressed so much that most of the air is forced out of it. This is what causes glacial ice to appear blue.

When a glacier moves, it isn't like a solid block of ice tumbling down a hill. A glacier is a river of ice. It flows. That's because the highly compressed layers of ice are very flexible (scientists use the term plastic) under great pressure. The upper layers, which aren't under as much pressure, are more brittle. This is why it's so dangerous to walk on a glacier -- the upper layers fracture and form huge crevasses which sometimes get covered over by fresh snow.

Scientists measure the movement of different parts of a glacier relative to each other by driving poles into the glacier. Over the course of a year, the poles' positions relative to one another change, sometimes by hundreds of feet. The same effect occurrs vertically, as different layers of ice move at different speeds. The outer edges of a glacier tend to move fastest.

On the next page, we'll learn some cool (no pun intended) glacier trivia.

Standing on a glacier sounds like it would be pretty cold. Not the sort of place you'd want to stand around naked. Yet that's exactly what 600 people did at Aletsch Glacier in Switzerland. On Aug. 18, 2007, artist Spencer Tunick (famous for his photographs of large crowds of nude people in outdoor places) shot photographs of the volunteers standing completely naked on the glacier itself. The piece was commissioned by environmental group Greenpeace to draw attention to global warming. Aletsch Glacier receded 400 feet in 2006 [source: Keating].