Anatomy of a Glacier 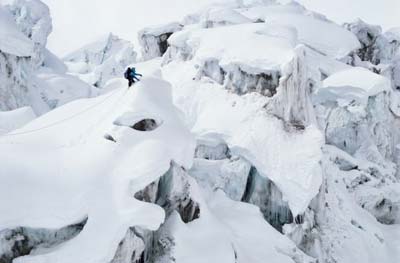 The boundary between the ablation and accumulation areas shifts seasonally. In the spring and summer, there's more melting (ablation) going on, so the ablation area is larger. In winter, the accumulation area grows. The average balance between areas determines the stability of the glacier. A glacier with a much larger average accumulation area is growing, while one with a larger ablation area is a glacier that's shrinking and could eventually disappear. When the two areas are roughly equal, it's considered a stable glacier. Climate change can affect glacier stability over a long term. Recent trends suggest that many of the world's glaciers are shrinking at alarming rates [source: University of Zurich].

The front of a glacier is known as the terminus. If it's a stable glacier, the terminus will always be in the same place. The glacier is still moving, but an equal amount of ice is added to and melted away from the glacier each year.

In addition to crevasses, the thermal and dynamic forces that work on a glacier create several other interesting features.

There are two main types of glaciers: alpine glaciers and ice sheets. There are only a few true ice sheets, but they're incredibly huge. One covers Antarctica, and another covers Greenland and a large area of the Arctic Ocean [source: Gallant]. Ice sheets move primarily by spreading, and may actually be made up of several smaller glaciers that form a conglomerate.

Alpine glaciers form at high elevations (not just the Alps) and "flow" down the mountain, usually through a glacial valley. Their movement is caused by basal slip.

Next, let's find out how glaciers have actually changed the shape of the planet.