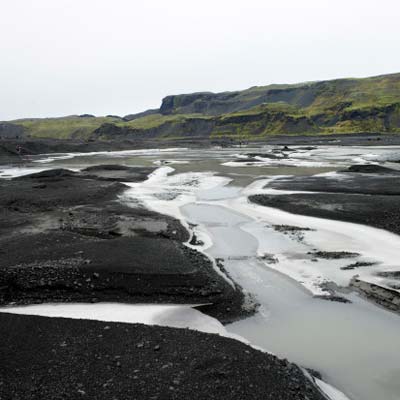 In this photo, you can see the cloudy meltwater caused by rock flour. Iceland, Myrdalsjokull Glacier.
Bridget Webber/Stone/Getty Images

Glaciers are so heavy that they dramatically change the shape of the land they rest on and move over. In fact, one of the biggest effects of any glacier on the planet requires no movement at all, just weight. The Antarctic ice cap is so heavy that it compresses the Earth at the south pole. As a result, Earth is slightly pear-shaped, with the south pole flatter than the north pole.

All glaciers have a similar effect on the land they rest on. They press down on the crust, which forces some of the liquid in the Earth's mantle out of the way. This is known as an isostatic depression. If the glacier later recedes, the mantle will gradually refill the space and push the crust back up into its original position. This is known as isostatic rebound. The rebound can take thousands of years. In fact, some parts of the Great Lakes region in North America are still rebounding from the last ice age.

Alpine glaciers move through valleys, gouging out the rock as they go. The result is a U-shaped valley with a flat valley floor, instead of the usual sharp V-shape. Glaciers also have a tendency to expand certain geological features when they pass over them. They widen valleys and deepen lakes, and in New York state they turned a series of small rivers into lakes. New York's Finger Lakes are 11 narrow, deep lakes that are all oriented with their long axis in a north/south direction. Glaciers gouged out the streambeds during the last glaciation [source: Paleontological Research Institution].

­As a glacier moves, it picks up rocks, some of them very large. The repeated melt/freeze cycles that occur inside and beneath a glacier pry them from the ground. The rocks on the bottom are ground together as they're carried along. The glacier's weight breaks down the rocks buried deep inside the ice. Glaciers are so good at crushing rocks that they grind them into a fine powder known as rock flour. Evidence of rock flour can be seen in the milky, grayish meltwater that flows out of some glaciers.

Not all rocks are ground down. Some are too big, or stay at the perimeter of the glacier. When a glacier recedes (by melting), it leaves the rocks it was carrying behind. If you ever see a field or hillside strewn with boulders that look as though someone just tossed them there, the culprit was probably a glacier.

Let's find out what else a glacier can do the land, from sheep shapes to the biggest floods on Earth.

Glaciers spend years carving out high mountain lakes that can seem to disappear overnight. Test your knowledge in the Disappearing Lake Quiz.