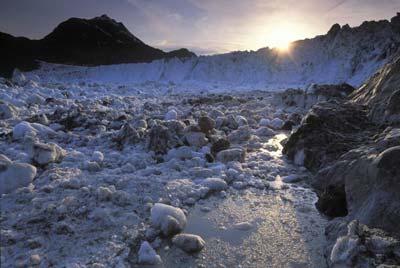 Columbia Glacier, Alaska which has retreated 9 miles since 1982. The face of the glacier is 320 feet high and the depth of the water is 900 feet. The glacier has lost about half of its height since 1982.
Peter Essick/Aurora/Getty Images

Earth's climate isn't static. It has experienced periods of warmth and periods of extreme cold extending back hundreds of millions of years. In fact, scientists believe that more than 500 million years ago, Earth went through several periods in which the entire planet was completely encased in ice. They refer to this as "snowball Earth" [source: Scientific American]. Eventually, volcanoes spewing carbon dioxide into the atmosphere allowed the planet to warm up.

Popular usage has made the term "ice age" a little confusing. In strict scientific usage, it refers to a long period (tens of millions of years) in which the Earth becomes cold enough that permanent ice sheets exist. It's thought that the Earth usually has very little permanent ice. You're probably thinking, "Well, you just talked about the ice sheets that cover Greenland and Antarctica. Does that mean we're living in an ice age?" The answer is yes. We're in a cooling period that began more than 30 million years ago [source: NOVA].

Within each long ice age are periods of relative warmth, when glaciers recede, and periods when it gets colder and glaciers advance. These periods are known as interglacial and glacial, respectively. We're currently in an interglacial period. When most people refer to "the ice age," they're talking about the last glacial period.

No one is completely sure what causes these long cyclical changes in Earth's climate. It's most likely a combination of many factors:

That last reason is the most important. Remember earlier when we mentioned that volcanoes warmed up "snowball Earth" by filling the atmosphere with carbon dioxide? It turns out that's the key to understanding our current problems with global warming.

All those prior ice ages and warming periods were caused by natural events, and they took thousands or millions of years to happen. Since the Industrial Revolution, we've been pouring carbon dioxide into the atmosphere ourselves. The result seem­s to be an increase in the temperature of the Earth that's happening far more quickly than natural processes would suggest.

What does this mean for the world's glaciers? There's plenty of evidence to show that they're shrinking. The rate of ice loss in Antarctica is increasing as the glaciers there slide into the ocean more quickly. Antarctica has lost 75 percent more ice between 1996 and 2006 than it used to [source: ScienceDaily]. Ice caps in the Canadian Arctic have shrunk 50 percent in the last century, and could be gone completely within decades [source: ScienceDaily]. Extensive photographic evidence shows glacial retreat worldwide [source: Nichols College]. A glacier in Peru lost 22 percent of its area in less than 40 years [source: The New York Times].

Find out more about glaciers, icebergs and other icy stuff by following the links below.

Water in the Bank

The loss of glaciers won't just raise sea levels to possibly catastrophic levels for many coastal cities. It will also accelerate global warming even further. Large ice sheets reflect solar energy away from the Earth. The more ice we lose, the more solar energy the Earth will absorb. In addition, glaciers represent a "bank" of freshwater for many regions. Glacial meltwater is vital to human existence. The loss of these glaciers will cause severe droughts.