What is the Baltic Sea anomaly? 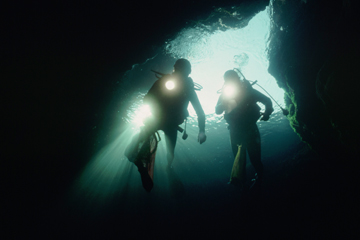 Divers have made some awesome discoveries in the ocean's watery depths, but the Baltic Sea anomaly isn't one of them.
© Jeffrey L. Rotman/Corbis

Let's start off with a modicum of generosity and humor the idea that a gigantic, interesting man-made object could be hanging out somewhere in the ocean.

Did you know that less than 5 percent of the ocean has been explored [source: NOAA]? And while the world has sent a handful of astronauts to the moon, did you know there have only been two manned missions to the deepest part of the ocean [source: Thar]? The first took place in 1960, when two aquanauts made the journey. The second didn't happen until 2012 -- and that's only because director James Cameron threw his own "Titanic" money down to make the first solo dive, since he's always been known for humility and modesty [source: National Geographic].

Point being, one could totally make an argument that the deep sea is a mysterious place, primed to throw some amazing curveballs our way. After all, we're constantly finding weird squid with vampire teeth and translucent neon-green eels we didn't know existed. (Source not cited because I made both those up. But seriously, what are the chances they don't exist, with all the crazy stuff down there?)

This is a wordy way of saying that finding something strange on the ocean floor isn't really a stretch. So when some Swedish divers found a couple of weird formations on the floor of the Baltic Sea, it was pretty much fair play to let our imaginations run wild. Were these parts of a sunken UFO? The lost city of Atlantis? A meteorite? Whatever it was, it seemed to be utterly bizarre.

Or, you know, not. Because while there have been images that show the formation as a circular kind of construction with stair-like structures, that's actually an illustration. There's a sonar image of the anomaly, but experts are skeptical that the sonar used is high resolution enough to capture the detail of the seafloor -- not to mention extremely doubtful the equipment was even functioning correctly [sources: Wolchover; Snopes].

So what are we left with? A Stockholm University geologist studied a few rocks the divers picked up from the site, and there wasn't a single alien life-form among them. Instead, there were mostly run-of-the-mill stones that everyone would expect from the kind of glacial basin the Baltic Sea fills. A basaltic rock managed to sneak in among the samples, which is kind of cool, since it's made by lava formation. But it's not really that wacky, considering that glaciers could've easily carried the rock from somewhere else [source: Wolchover].

And for that matter, they could have carried big chunks of rock like the "formation" itself. Most experts agree that the structure is probably nothing close to man-made. It might be a glacial deposit. It could also be a rock outcropping, which would totally make sense on the ocean floor. Either way, nothing we're seeing is either alien or even part of a lost civilization. But hey, don't let that discourage you: We could certainly use a bit of curiosity when it comes to ocean exploration.

So You Dug Up a Woolly Mammoth in Your Backyard. Can You Keep It?
Why is Arctic ice melting 50 years too fast?
What if the Chicxulub meteor Had Missed the Earth?