Could Earth ever get a new ocean? 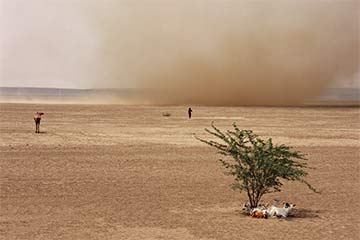 A huge rift forming in the Ethiopian Afar desert is expected to become the world’s newest ocean. In about 10 million years.
Harry Hook/Getty Images

Of the vast ocean that covers 71 percent of the planet, its five distinct regions -- Atlantic, Pacific, Indian, Arctic and Antarctic -- are memorized by schoolchildren, navigated by sailors and inhabited by some of the most biologically diverse species in the world [source: NOAA].

But could Earth ever develop a new ocean? It seems unlikely, given the monopoly existing ocean regions have had on the liquid portion of our planet's surface for about 4 million years. Yet, surprisingly, the formation of this new ocean is already underway.

A huge rift forming in the Ethiopian Afar desert is expected to become the world's newest ocean. The 40-mile (64-kilometer) crack, which is sometimes more than 20 feet (6 meters) wide, sits along a boundary of Earth's shifting tectonic plates. At the rift's northern end lies Dabbahu, a volcano whose 2005 eruption helped spawn the first 35 miles (56 kilometers) of the rift in just 10 days. The eruption was preceded by earthquakes that caused magma -- molten rock from the center of Earth -- to gush up through the center of the crack, quickly splitting it in both directions.

Since that time, magma has continued to flow like toffee, volcanoes have continued to erupt and the deep fissure has continued to grow -- albeit at a slower rate that has increased the split by several miles. Scientists are studying the process, both for its remarkably fast timeline and the fact that it mirrors a process that normally takes place on the ocean floor at a depth too remote to reach.

Until 2005, the African and Arabian plates that border each other in the remote Afar desert had been spreading apart at a snail's pace of less than 1 inch (2.5 centimeters) per year. In the past 30 million years, the opposing masses had only managed to form a 186-mile (299-kilometer) depression in addition to the adjacent Red Sea, but there had been no dramatic shift like the one that began in 2005 [source: LiveScience].

Eventually, scientists expect the Afar Rift to connect the Red Sea to the north and the Arabian Sea to the south. When this happens, the Afar Rift will turn into a new ocean that will split the African continent and release the Horn of Africa from its land mass [source: PhysOrg].

Even though the new ocean splitting the African continent is only growing about as fast as a fingernail, scientists are monitoring the changes with bated breath. After all, the ability to witness a process that is typically inaccessible has the makings of a once-in-a-career opportunity. That is, until you consider the fact that, at its current rate, this new ocean will probably take another 10 million years to fully form [source: Wright].

River-bottom Bones: The Strange World of Underwater Fossil Hunting
What Causes an Iceberg to Flip?
Why Aren't We All on the Same Time Zone?