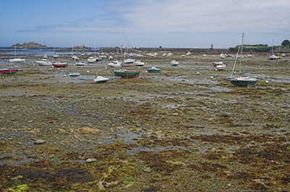 Time and tide wait for no man, not even a little boy rushing to finish his sand castle before it gets washed away. With amazing regularity, the Earth's oceans rise and fall daily, due to the gravitational attraction of the moon and sun on the Earth's surface. These changes in water level are called tides, and knowing when they will occur is essential to a variety of people, including the budding architect on the beach.

Government agencies throughout the world measure tides daily to predict when the two highest and lowest tides in an area will occur and how high they will be. This compilation of data is called a tide table. Tides have little effect in the open ocean and in lakes, so tables mainly are generated for coastal areas, inlets, bays and estuaries.

Not surprisingly, boats rely heavily on tidal information. Traveling through shallow ports and narrow intracoastal waterways or under bridges is a risky venture if you don't know what's going on with the tides. Depending on the area, the difference between high and low tides, or the tidal range, may be more than 49 feet (15 meters) [source: NOAA: Tides and Water Levels]. If you're a sea captain steering your ship under a low bridge, underestimating the range could be devastating.

Fishermen often draw on information about the tides to improve their catches since certain species of fish may congregate during periods of high or low water. In addition, strong tidal currents can corral fish into one area, and if fishermen know when that current will occur, they'll hit the jackpot.

Tide tables are also useful in planning coastal construction projects, as well as coastal rehabilitation work and disaster cleanups. Many people use the tables for recreational pursuits, too, such as surfers looking to catch the ultimate wave.

On the next page, find out how a division of NOAA prepares tide tables and why its predictions aren't always 100 percent accurate. 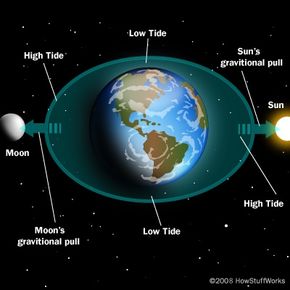 Tides depend on several factors, including where the sun and moon are relative to the Earth. When the moon and the sun line up with the Earth, as they do here, a high tide occurs.
HowStuffWorks

The height of tides is determined by a complex combination of factors relating to the positions of the Earth, sun and moon. Because the moon revolves around the Earth, the Earth revolves around the sun and the Earth also rotates on its own axis, the distances between the three bodies and their relative positions to one another constantly change. Depending on this distance and position, tides may be higher or lower, and tidal currents may be stronger or weaker.

For example, when the moon and sun align with the Earth, tides are stronger because the attraction of the moon and the sun combine. When they form a right angle with the Earth, their pulls partially cancel each other out, so the tides are weaker. The moon's gravitational attraction has more effect on tides than the sun's because it is 390 times closer to the Earth. Thus, its pull is twice as strong as the sun's [source: NOAA: Tides and Water Levels].

Although tidal characteristics are largely determined by these regularly occurring and predictable astronomical forces, constructing tide tables isn't an exact science. Among other things, factors such as existing ocean currents, winds, the contour of the ocean bottom and existing land masses must be accounted for. Existing ocean currents and winds, depending on their direction, can either negate or accentuate a tide's pull; while topography -- both above and below the ocean surface -- can slow tides down, speed them up and even raise or lower their height.

The most accurate tidal predictions usually exist for places located on the coast because they are less affected by winds and other meteorological events. Areas with shallow water or in a bay are more affected by alternate factors. For example, an estuary fed by a river might see tidal levels several feet higher than predicted if heavy rains flush in river water. An inland harbor that receives strong winds might have lower-than-predicted tides if the winds blow against the incoming tide.

In the United States, the Center for Operational Oceanographic Products and Services, or CO-OPS, (a branch of the National Ocean Survey), is the official source of predictions for approximately 3,000 locations around the country. CO-OPS also makes predictions for other countries and territories.

Since astronomical data are not sufficient to calculate tides, predictions also are based on actual tidal measurements in many areas over an extended period. For these observations, the National Ocean Survey maintains a network of 140 tide stations that house equipment to take the following measurements every six minutes:

The collected data is relayed to the center every hour and is immediately available on the Internet from links such as the ones listed on the next page.

With the vast network of tide stations and large compilation of tide tables available to anyone with an Internet connection, you shouldn't have too much trouble building that sand castle -- even if tides don't wait. For more information on tides and tide tables, look into the links on the next page.

Tide tables, which exist for many different locations, differ from the tide charts that exist for only a few areas. According to the U.S. National Oceanic and Atmospheric Administration's (NOAA's) definition, tide charts are more detailed. The charts show not only the times and heights of the highest and lowest tides, but also the water levels throughout an area at a particular time.