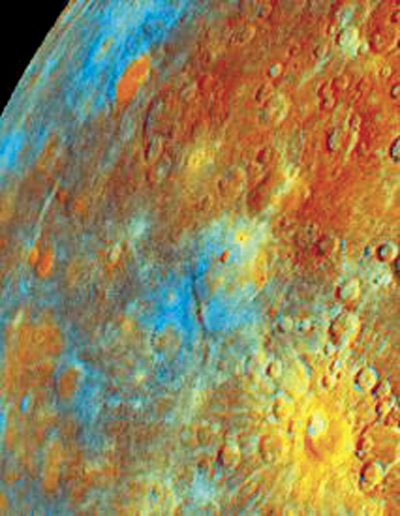 Scientists used pictures taken by Mariner 10 to learn more about what Mercury is made of. The image shows the different elements on the surface of the planet, which include minerals and iron. This picture also gives scientists information about how old the planet is.

Mercury is the closest planet to the sun and the second smallest. It is the fastest-moving planet, so it was named after the Roman god of speed. Like Earth, it is a terrestrial planet, meaning it has a solid surface that you could land on.

Mercury has almost no atmosphere; it is so small and so close to the sun that its weak gravitational field can't hold on to gases. It is an unusual planet. It rotates slowly, but it has a fast orbit speed, nearly 50 kilometers (30 miles) per second. A year on Mercury (the time it takes to orbit the sun) is equivalent to 88 Earth-days. It takes Mercury 59 Earth-days to spin around once on its axis. Because Mercury completes three rotations for every two orbits around the sun, a full day (the time it takes for the sun to return to the same point in the sky) is almost 176 Earth-days. That makes its day twice as long as its year.

It is difficult to spot Mercury from Earth because on some days it is only visible during twilight hours. The sun's brightness also makes Mercury difficult to see, since it is so close to the sun. Because Mercury is so close to the sun and has no atmosphere, the temperature varies greatly between the side that is facing the sun and the side turned away from the sun. On the unlit side, the surface temperature reaches 800° Fahrenheit during the day and -300° Fahrenheit during its long night. On its lit side, temperatures can reach into the hundreds of degrees, hot enough to melt tin and lead. Mercury has the greatest temperature change of any planet.

Mercury has a very elliptical orbit, so it comes as close as 47 million kilometers and goes as far as 70 million kilometers from the sun. Its rocky surface is marked by thousands of craters as a result of being hit by many objects during the early era of the solar system. NASA launched the spacecraft Messenger to Mercury and will go into orbit in March 2011. It will spend a year there taking pictures and gathering information.

Just the facts on Mercury