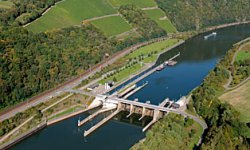 How much do you know about alternative power systems?
DCI

Alternative energy isn't so "alternative" anymore. It's in the news, on political platforms, atop roofs and filling gas tanks, and the options have grown enough to change the conversation: It's not whether we want it, but which kind we want.

Most of our current energy consumption draws on fossil fuels. These fuels aren't renewable, and experts predict could they start running out as soon as 50 years from now. Plus, the combustion necessary to draw energy from fossil fuels releases vast amounts of pollution that lead to illness, ecological destruction and what's turning out to be a nasty case of global climate change.

Ideally, alternative energy sources are low-polluters, are they're renewable to varying degrees. The thing is, it's not cheap to develop any energy system from the ground up on a large scale, so we need to focus: Which are the most promising options out there? Where should we put our money and our innovation muscle?

Here are five of the most promising sources of energy that could take us, eventually, away from our dependence on fossil fuels. No single source is perfect, but each is potentially a path toward clean, renewable power.

First up, from deep in the Earth …

Geothermal energy is more sustainable than fossil fuels and gets high marks for efficiency, cost and environmental impact.

This type of energy production taps into the extremely high temperatures found deep within Earth's crust, at the core. Temperatures there -- driven by natural, ongoing processes of radioactive decay -- are hotter than the surface of the sun, and we see signs of it in such geological formations as volcanoes, hot springs and geysers. To harness this heat -- sometimes as hot water, other times as steam -- we need only dig down deep enough in the right spot, where pockets of this geothermal energy are creeping to the surface. These wells provide taps into the Earth's intense heat energy.

Once the steam or hot water is collected from the well, it's easy enough to use it directly as a heating source or to spin a turbine to generate electricity. Start-up and consumer costs are relatively low, but the potential for this type of energy production is very site-specific, limited to the "geothermal reservoirs" that dot the globe. In the United States, for instance, geothermal sites are mostly in the West, and California is the largest geothermal producer. One other caveat: This type of energy may not be strictly renewable, since we could potentially use this heat faster than the Earth can replenish it.

Sunlight, on the other hand, is a tough thing to deplete …

Solar energy is an alternative-power standby, and it comes in a couple of forms: thermal and photovoltaic. While both types are relatively promising, photovoltaic is, at the moment, the less expensive option, and it has already been widely proven on the small scale.

Solar photovoltaics are the technology behind what we call "solar panels," and lots of homes and businesses have them on their roofs. These panels convert photons in sunlight directly into electricity. The inability to (easily) store this electricity is currently an issue, and it's not the most efficient form of power generation out there. Still, the technology has a lot going for it: It fits easily into small-scale, home and business applications; it produces no harmful emissions and uses entirely renewable fuel; and it's getting cheaper every year as more manufacturers get in on the action.

Solar photovoltaics are being implemented in larger-scale applications, popping up in huge arrays in the sunniest parts of the country. Both large- and small-scale systems are already connected to the grid, offering an appealingly decentralized system for generating power. Solar-energy production is really only worthwhile in the sunniest areas, but its well-proven ability to supply entire sunny communities with clean power makes it a promising alternative to fossil fuels.

Next, the energy in the stink (and elsewhere) …

Biomass energy encompasses a huge range of potential sources with one big thing in common: They're alive. The sheer breadth of possibilities present in this alternative power source makes it an excellent place for investment and innovation.

This type of power system extracts the solar energy that plants and microorganisms use for food. Biomass-derived energy has been a primary heat source since man discovered fire -- wood is a combustible biofuel used all over the planet for heating and cooking. Other forms of biomass are already in use in the form of corn ethanol, biodiesel and methane captured from landfills, where active microorganisms release the stinky gas through natural, ongoing processes.

While biomass does require combustion to release its energy and therefore does release harmful emissions, many types of biofuels pollute less than fossil fuels, and they're unquestionably a more sustainable sources of power. Plus, "trash"-derived biofuels that recycle substances like fast-food-fryer grease and decaying landfill mass have the added bonus of reducing waste.

Next, a time-tested but controversial energy producer …

Hydroelectric power plants are one of the more widely debated alternative power sources due to the significant, harmful environmental impacts of dams. But it's not possible to talk about the success of the alternative power generation without talking about water.

Hydroelectric dams make use of the kinetic energy in moving water to produce power. Water spins a turbine, the turbine spins a generator and the generator creates electricity. This form of power generation can cause harm by disrupting the natural action of moving bodies of water. Still, it's a proven technology that produces no pollution, is affordable to produce and extremely efficient, and uses an entirely renewable fuel.

Finally, the one everybody is talking about …

Water and sunlight are powerful elements in energy production, but wind takes the prize for current expansion. Wind power is probably the fastest-growing sector of the renewables industry, and it holds a level of promise that is for the most part unmarred by complaints of ruining the scenery: ABC News reports a U.S. Department of Energy (DOE) finding that dedicating 6 percent of U.S. land to wind farms could entirely replace our need for other energy sources.

Thus the growth explosion, perhaps. A wind farm is like a hydropower plant, but there's no need for a dam. The fuel in this case is wind. It spins the blades of a towering turbine, which turns a generator, which creates electricity. The relative affordability, efficiency and environmentally friendly nature of wind power make it one of the real stars of the renewable-energy future.

It's not entirely friendly to the environment, though. In addition to the "eyesore" problem, wind farms have also been found to disrupt the migratory patterns (and lives) of birds and bats. Also, wind is not the most reliable energy source. Even in very windy areas, energy production can sometimes be hit or miss.

Shortcomings aside, wind power has the ability to provide massive amounts of power directly to the grid. It's more conducive to large-scale generation than solar, less ecologically disruptive than hydropower, less polluting than biomass and further along in development than geothermal.

With current attempts to move large-scale farms offshore, enabling greater energy production without the eyesore issue of land-based turbines, wind power appears to be poised for even bigger things. Short of a major breakthrough in the nuclear fusion realm, wind could be our most promising hope for slowly breaking our pesky fossil-fuel habit -- maybe, someday, entirely.