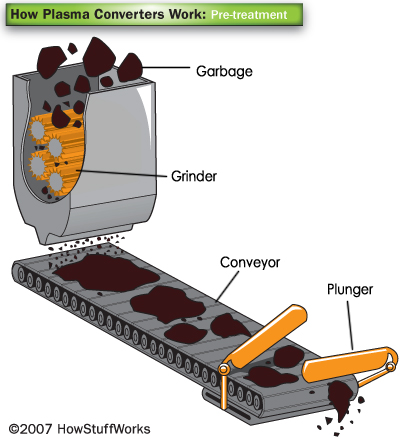 Currently, plasma plants aren't standardized. Many different companies are designing plasma facilities, and for the moment each facility is essentially custom-built. Still, most converters have the following components in common:

In order to feed garbage into the converter, almost all plasma facilities have a conveyor system. Garbage is loaded on the conveyor and is pushed into the furnace (or pre-treatment system if the plasma facility uses one) by a plunger.

Although a plasma torch can break down waste without any special pre-treatment, most plasma facilities employ some sort of pre-treatment process to make the entire system more efficient. Some designs use grinders or crushers to reduce the size of the individual pieces of garbage before moving in to the furnace. The plasma torch can break down the smaller pieces faster.

Here's where the magic happens. Furnaces have an airlock system to allow garbage to come in while preventing the hot gases in the furnace from escaping into the atmosphere. The furnace houses at least one plasma torch; many furnaces have multiple torches to break down all the matter. These torches are usually placed a little lower than halfway down the furnace. The furnace also features a drainage system to tap off the slag as it accumulates and a vent system to vent out the gases. In order to withstand the intense heat, furnaces are lined with refractory material and often have a water-cooling system as well.

The plasma torches used in these facilities are custom-built. The amount of energy they consume, the lifespan of the electrodes it uses, the gas used for ionization (most torches just use ordinary air), the downtime it takes to replace an offline torch and the size of the plasma field it generates all depend on the specific manufacturer. Plasma torches are water-cooled.

In the next section we'll take a look at slag drainage and the afterburners.

This article focuses on the plasma gasification of municipal solid waste (MSW), the industry term for what we normally refer to as garbage or trash.