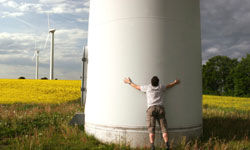 In the rush to find fossil fuel's replacement as the next cheap and plentiful energy source for powering the human machine, wind gets a lot of attention. After all, it's certainly in no small supply (except when you need to get that kite airborne), and the idea of continuous, zero-pollution energy is too enticing to ignore. Oh, and there's the fact that mankind burns through about 400 quadrillion British Thermal Units (BTUs) annually, according to the U.S. Department of Energy. Four hundred quadrillion doesn't even sound like a real number, but consider that a single BTU is about as much energy generated by a lit match and that may help put it into perspective [source: McLamb].

It's not like wind hasn't been earning its keep. For centuries, we've used it to mill grains, power ships and even to generate electricity, starting in the 1930s. But as energy demand climbs, so have efforts to turn wind into a viable option for producing electricity on a large scale. Wind turbines in particular are what people think of when discussing wind power. These turbines can measure more than 400 feet (122 meters) tall and weigh in at close to 400 tons.

We know the basics, but in this article we'll explore some of the unsung, and surprising, facts about wind power.