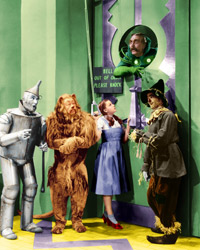 The cities on our list may not be as sparkly, but they're a whole lot greener than the Emerald City.
Silver Screen Collection/Hulton Archive/Getty Images

While it's debatable whether Oz's Emerald City meets the criteria for being an amazing "green" city, many real cities around the world make the grade on lists compiled annually by experts. Model cities are ranked by a combination of criteria. These include urban planning and environmental statistics. They encompass energy sources, consumption and emissions, as well as transportation options and habits. Most lists also make note of green living (such as the availability of public parks, green jobs and sustainable buildings and green perspective (such as recycling).

It's uniquely challenging for urban areas to be green. They have a high volume of people, traffic congestion, trash and air pollution to name just a few obstacles. Seventy-five percent of the world's energy is consumed by the world's cities [source: ThomasNet Industrial Newsroom]. Green cities have to strike a balance of managing their current needs without compromising the city's (and environment's) future.

In the 1990s, industrialized countries around the world joined together to make progress against global warming and climate change. Together they drafted and approved the Kyoto Protocol. The agreement aims to reduce the effects of climate change through the reduction of six recognized greenhouse gases: carbon dioxide, methane, nitrous oxide, hydrofluorocarbons, perfluorocarbons and sulfur hexafluoride.

Nations that have joined the pact since it was adopted in 1997 agree and are legally bound to the goal of reducing their greenhouse gas emissions by an average of 5 percent below their reported 1990 levels by the period of 2008 to 2012 [source: BBC]. Some methods for meeting the reduced emissions levels include the adoption of renewable energy sources such as solar and wind power, sustainable agricultural practices and the promotion of energy efficiency.

In this article, we'll look at five amazing cities known around the world not only for their adoption of green practices but also for their green innovation and leadership.