by Lance Looper
Prev NEXT
5 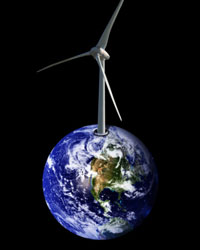 Is the future a wind-powered world?
Hemera/Thinkstock

With so much potential, companies are positioning themselves to take advantage. In fact, production surged between 2000 and 2006. And even later, in 2009, while world economies plunged, the wind industry thrived.That year alone, the installed wind power capacity, or the amount of energy capable of being produced by existing equipment, increased to 158,000 megawatts (that 31 percent jump we discussed in Fact No.10) [source: Roney]. World production is currently capable of serving the needs of 250 million people, and more than 70 countries have installations.

The United Nations recently issued a report that said making the jump from fossil fuels to renewable energy (not wind exclusively) would require more than $12 trillion over the next two decades [source: Morales]. This level of commitment will not come easily, especially while traditional resources remain relatively inexpensive. So, in order to continue the growth curve established between 2000 and 2006, it's going to take serious government incentives to encourage development.