Why Is There an Alang Shipyard? 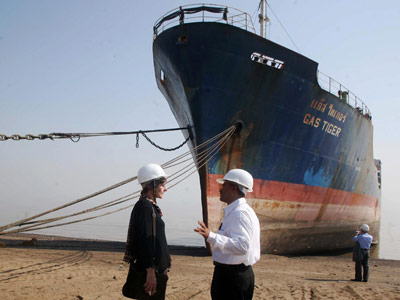 Shipbreaking was predominately performed in the United States and Europe until the 1970s, but the high cost of labor and environmental regulations eventually caused the industry to move to places such as Korea and Taiwan. As these countries became more economically developed, they soon began to move away from the dangerous business of shipbreaking, too. Alang traces its roots to the 1980s, when India took the industry by storm.

One reason the shipbreaking industry flourished at Alang is because Indian shipbreakers don't use high-tech equipment or docks. Instead, Indian businessmen take a step back in time -- they haul ships to shore and then dismantle them by hand. A person, company or government sells its ship to one of the Alang shipbreakers, and the shipbreaker reels in profit from recycling materials from the ship. Consistent with the graveyard-like atmosphere of Alang, individuals or companies own plots in the huge salvage yard where they dismantle ships. Approximately 180 shipbreakers own plots at Alang [source: Zubrzycki]. On any given day, 200 ships stand on the beach in various stages of dissection [source: Langewiesche].

But why are powerful and expensive ships dismantled in the first place? Once they hit a certain age -- usually around 25 -- they become too costly to operate. Think of it as an old car that constantly needs repair. It costs at least $20,000 a year to maintain the smallest inactive military vessel. Storing two old battleships can cost $1.5 million a year. Some ships are in such a state of disrepair that to fix them up and dry dock them would cost at least $1 million [source: Langewiesche].

The cheapest way to dispose of ships is to take them apart and sell the pieces for scrap metal and reusable parts. It's like selling your jalopy to the junkyard. Instead of paying to get rid of old ships, owners sell them to a global scrap market, like Alang. Ships can bring in lots of money in scrap steel -- it's not unusual for a cargo ship to bring in a million dollars in steel alone [source: Langewiesche]. In 1998, 347 ships were scrapped at Alang, netting $133 million in profit [source: Burns].

Although most of the profit in shipbreaking comes from steel, shipbreakers let nothing go to waste. Many shantytowns have developed around Alang, with shops specializing in everything from refrigeration equipment to appliances to interior décor salvaged from ships.

How do you go about dismantling an enormous ocean liner? On the next page, you'll learn how workers at Alang do their jobs.

Gujarat's most famous native son is Mahatma Gandhi, civil rights champion and advocate of nonviolent protest and civil disobedience. Due to the controversy surrounding Alang, Gandhi's home is still an area of hotly-contested debate regarding human rights.