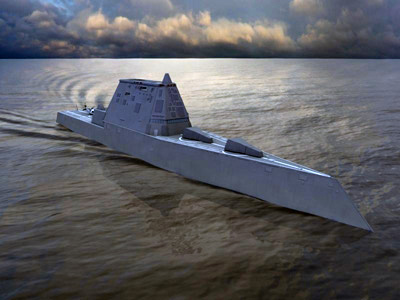 The Zumwalt class destroyer will be the most sophisticated warship in naval history. See our collection of submarine pictures.
Photo courtesy of the U.S. Federal Government

On May 23, 2007, nine U.S. warships entered the Persian Gulf to conduct exercises off Iran's coast. The flotilla consisted of two nuclear aircraft carriers, two guided-missile cruisers, three amphibious assault vessels, a fast-attack submarine and two guided-missile destroyers: the USS O'Kane (DDG 77) and the USS Higgins (DDG 76). Both destroyers belong to the Arleigh-Burke class, the most advanced surface combatant sailing the seas today. They measure 465 feet long and feature four gas turbines turning two shafts, integrated missile guidance systems and multi-function phased array radar. And, if the U.S. Navy has its way, they could soon be overshadowed by an even more potent class of destroyer -- a type of ship specifically designed for operations like the one conducted in the waters near Iran.

The ship will be known as the Zumwalt class destroyer, named in honor of Admiral Elmo R. "Bud" Zumwalt Jr., Chief of Naval Operations from 1970 to 1974. It will be the most sophisticated warship in naval history and may be sailing with the U.S. fleet in as little as five years. In this article, we'll take a look at this next-generation destroyer -- both inside and out -- to see how it will support national security and military strategies.