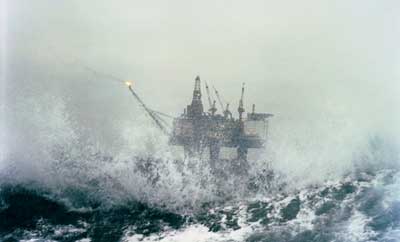 Some people say money makes the world go round. Others insist the key ingredient is love or even music. But whatever drives humanity to carry on from day to day, our dependence on fossil fuels leaves one fact for certain: The axle of our spinning globe is greased with oil.

We consume more than 80 million barrels of the stuff every day [source: CIA]. To meet our ravenous demand for fossil fuels, petroleum companies constantly comb the planet for new reserves. Since oceans cover nearly three-quarters of Earth's surface, a great deal of those reserves wind up underwater.

­Reaching these undersea drilling sites poses quite a challenge. After all, drilling on land is an undertaking on its own. How do you drill in lightless oce­an depths and transport all that liquid, gas and solid petroleum back to the surface? ­How do you keep from polluting the ocean? And how do you do all of this, with tons of special equipment, in the middle of rough seas?

To surmount these obstacles, petroleum companies have invested billions into the development of offshore drilling and offshore oil platforms. The first of these platforms was constructed in 1897 at the end of a wharf in California. In the years to follow, oil prospectors pushed out into the ocean, first on piers and then on artificial islands. In 1928, a Texan oilman unveiled the first mobile oil platform for drilling in wetlands. The structure was little more than a barge with a drilling outfit mounted on top, but it set the example for decades of advancements to come.

In the years that followed, petroleum companies moved even farther into the ocean. In 1947, a consortium of oil companies built the first platform that you couldn't see from land in the Gulf of Mexico. Even the North Sea, which endures nearly constant inclement weather, is currently home to many offshore drilling sites [source: The Guardian].

Today's oil rigs are truly gigantic structures. Some are basically floating cities, employing and housing hundreds of people. Other massive production facilities sit atop undersea towers that descend as far as 4,000 feet (1,219 meters) into the depths -- taller than the world's most ambitious skyscrapers. In an effort to sustain their fossil fuel dependency, humans have built some of the largest floating structures on Earth.

In this article, we'll examine how petroleum companies go about sniffing out this buried, black gold and the methods they use to extract it. 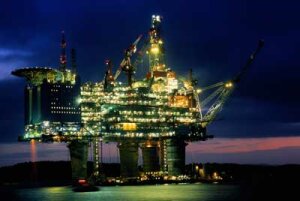