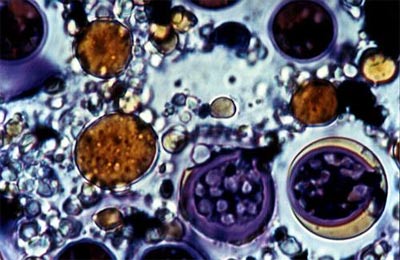 Pretty, isn't it? Although this looks like abstract art, this stuff could be fueling our cars and airplanes in the near future. See more green science pictures.
Photo courtesy: U.S. Department of Energy

The race is on for a new form of fuel. With gasoline skyrocketing to more than $4 a gallon in 2008, dependence on imported oil and depleting resources worldwide, finding alternatives to petroleum-based fuel and fuel-related products is urgent. Fortunately, scientists have been studying the production of alternative products to make a cleaner, greener fuel for years.

It's possible that we may be using one of these alternative fuels in the near future. Alga (or its plural, algae) may be the miracle element in the search for a more environmentally-friendly, mass-produced product that can be converted into fuel. Algae grow naturally all over the world. Under optimal conditions, it can be grown in massive, almost limitless, amounts. Did you know that half of algae's composition, by weight, is lipid oil? Scientists have been studying this oil for decades to convert it into algae biodiesel -- a fuel that burns cleaner and more efficiently than petroleum.

You may be wondering exactly how this slimy green stuff can be turned into a fuel for cars and airplanes, and even for the heaters that warm our homes and schools. Let's find out more about what makes biodiesel from algae so exciting.

Algae were first explored as a fuel alternative in 1978 under President Jimmy Carter. Gas prices had skyrocketed, lines at the pump were endless, and the government was looking to help ease the crisis. The Aquatic Species Program run by the National Renewable Energy Laboratory, researched high oil-output algae for biofuel. After testing more than 3,000 types of algae, the program concluded that the high-yielding plant, if produced in large enough amounts, could replace fossil fuels for home heating and transportation purposes.

What Makes Biodiesel From Algae So Exciting? 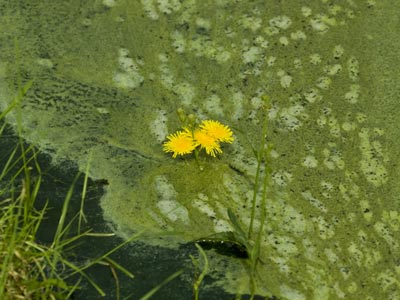 Who would have thought pond scum could be the key ingredient in green fuel?
Navicet/Getty Images

Replacing fossil fuels with algae, a renewable resource, to make biodiesel is an exciting possibility. Before we dive into the subject of algae biodiesel, let's get to know more about algae. More than 100,000 different species of plantlike organisms belong the algae family. They come in various forms and colors, from tiny protozoa floating in ponds to huge bunches of seaweed inhabiting the ocean. Leafy kelp, grassy moss and fungus growing on rocks are all forms of algae. You may even see algae in different colors such as red, green and brown. Algae are easy to grow and can be manipulated to produce huge amounts without disturbing any natural habitats or food sources. Algae are easy to please -- all they need are water, sunlight and carbon dioxide.

So, are algae all the same? Various algae contain different levels of oil. Of all the algae out there, pond scum -- algae that sit on top of ponds -- is best suited for biodiesel.

How about some leftovers? Pressing algae creates a few more useful byproducts -- fertilizer and feedstock -- without depleting other food sources.

The most exciting part of algae biodiesel is the numbers game. Biodiesel makers claim they'll be able to produce more than 100,000 gallons of algae oil per acre per year depending on:

Extracting oil from algae may seem like a grimy job. So, let's roll up our sleeves and get into algae biodiesel engineering.

Off to the Races

Researchers are testing other resources for biodiesel use. They include corn, palm oil, soybean, hemp seed, switchgrass, sugarcane and wood residue. Only time will tell which one will be the next major fuel supply.

Algae biodiesel may soon be on the menu at gas stations in your neighborhood.
Andreas Rentz/Getty Images

How can we get oil from algae? It's like getting juice from an orange -- with an additional chemical reaction thrown in. Algae are grown in either open-pond or closed-pond systems, which we'll discuss later. Once the algae are harvested, the lipids, or oils, are extracted from the walls of the algae cells.

There are a few different ways to extract the oil from algae. The oil press is the simplest and most popular method. It's similar to the concept of the olive press. It can extract up to 75 percent of the oil from the algae being pressed.

Basically a two-part process, the hexane solvent method (combined with pressing the algae) extracts up to 95 percent of oil from algae. First, the press squeezes out the oil. Then, leftover algae is mixed with hexane, filtered and cleaned so there's no chemical left in the oil.

Once the oil's extracted, it's refined using fatty acid chains in a process called transesterification. Here, a catalyst such as sodium hydroxide is mixed in with an alcohol such as methanol. This creates a biodiesel fuel combined with a glycerol. The mixture is refined to remove the glycerol. The final product is algae biodiesel fuel.

The process of extracting oil from the algae is universal, but companies producing algae biodiesel are using diverse methods to grow enough algae to produce large amounts of oil.

Now, we'll learn how they do it.

Can you say Transesterification?

Algae biodiesel researchers and engineers are using a process studied in organic chemistry called transestrerification to come up with efficient ways to make algae biodiesel fuel. In this process, an alcohol and an ester compound are mixed, and through the resulting reaction produce a different type of alcohol and a different type of ester. The same process is used to make polyester fabrics. An ester -- a special type of chemical compound in which an acid has had one of its hydroxy groups -- or a molecule of hydrogen and oxygen bonded together -- replaced by a molecule of oxygen. This process allows the oil that comes from the algae to be altered into biodiesel through a specific chemical reaction.

Growing Algae for Biodiesel Use 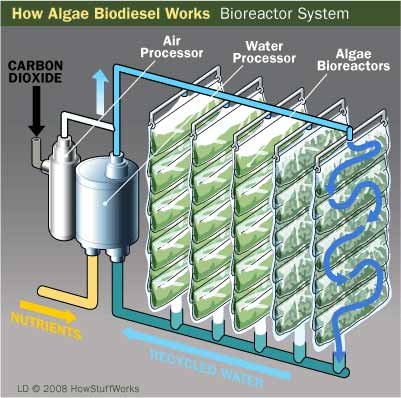 So, we've talked about the chemical process that takes algae and turns it into biodiesel fuel. The real question, and one which many companies all over the globe are trying to answer, is how can we produce enough to meet the demand for biodiesel?

The most natural method of growing algae for biodiesel production is through open-pond growing. Using open ponds, we can grow algae in hot, sunny areas of the world to get maximum production. While this is the least invasive of all the growing techniques, it has some drawbacks. Bad weather can stunt algae growth, as can contamination from strains of bacteria or other outside organisms. The water in which the algae grow also has to be kept at a certain temperature, which can be difficult to maintain.

Vertical growth/closed loop production has been developed by biofuel companies to produce algae faster and more efficiently than open pond growth. With vertical growing, algae are placed in clear plastic bags, so they can be exposed to sunlight on two sides. The bags are stacked high and protected from the rain by a cover. The extra sun exposure increases the productivity rate of the algae, which in turn increases oil production. The algae are also protected from contamination.

Other companies working to produce algae for biodiesel are constructing closed-tank bioreactor plants to help increase oil rates even further. Instead of growing algae outside, indoor plants are built with large, round drums that grow algae under ideal conditions. The algae are manipulated into growing at maximum levels and can be harvested every day. This yields a very high output of algae, which in turn yields large amounts of oil for biodiesel. Closed bioreactor plants can also be strategically placed near energy plants to capture excess carbon dioxide that would otherwise pollute the air.

Researchers are testing another variation of the closed-container or closed-pond process -- fermentation. Algae are cultivated in closed containers and fed sugar to promote growth. This method eliminates all margin of error since it allows growers to control all environmental factors. The benefit of this process is that it allows the algae biodiesel to be produced anywhere in the world. But, researchers are trying to figure out where to get enough sugar without creating problems.

Let's learn more about the pros and cons of algae biodiesel.

A number of books and services claim you can produce your own biodiesel -- even with algae. Making biodiesel in your garage requires a lot of time, money and effort on your part. It can be dangerous. Be cautious, or leave it up to the experts!

The Pros and Cons of Algae Biodiesel

It all sounds perfect, right? An abundant, plantlike material is grown, squeezed, chemically altered and blended into a cleaner, efficient biodiesel. It may sound ideal, but there are some cons, the critics of algae biodiesel like to point out.

For one, open pond growing is extremely risky -- the water has to be an exact temperature. Carbon dioxide has to be pumped into the ponds, and there is a high risk of contamination. However, many algae biodiesel labs are solving this problem by using the closed bioreactor system to counteract these issues.

Another problem is that there hasn't been any real testing done with yet algae biodiesel and actual cars. Companies worldwide are making big deals with large oil companies to test and produce the pond scum. Right now, they're still in the test phases. As far as we know, there's just one algae biodiesel car on the streets. In January 2008, a company used algae biodiesel to fuel a Mercedes Benz E320 diesel to cruise the streets of Park City, Utah during the Sundance Film Festival. However, no statistics were released on the car's gas mileage or what kind of emissions it produced.

Whatever happens, the search for a better fuel is exciting. For now, we'll probably be reading about algae biodiesel development instead of driving cars containing this unique product.

See these great links to get lots more information on algae biodiesel.

Some of the most diverse organisms on the planet, algae seem to creep up in any area that's damp, moist, warm and wet, including marshes, ponds, rocks and rivers. Certain forms even live on animals like turtles which go back and forth from water to land.