The Amazing, and Alarming, Science Behind Red Snow

by Mark Mancini Feb 15, 2018
Large swaths of red snow can be seen here in Neko Harbour, Antarctica. The red color is sometimes caused from the presence of the algae Chlamydomonas nivalis. Jerzy Strzelecki/Wikimedia Commons

Normally, snow looks white. This is because the ice crystals that make up clusters of snow reflect and scatter every color frequency in the visible light spectrum. So when sunlight bounces off a snowbank, all those colors blend together, giving the snow a white appearance.

Or at least, that's what usually happens. Every so often, though, Mother Nature throws us a curveball with a blanket of non-white snow.

Pliny the Elder was a Roman naturalist who lived from 23 to 79 C.E. In one of his books, he wrote about red-tinted snow, which ancient travelers sometimes encountered. His hypothesis was that snow changes color as time goes by — like a rusting piece of iron. "Snow itself," Pliny wrote, "reddens with old age."

Dreaming of a Scarlet Winter

Reports of crimson-colored snow kept pouring in over the next two millennia. "People in the Dark and Middle Ages were often freaked out by it!" climate scientist Randall Cerveny says in an email. A professor at Arizona State University, Cerveny dedicated an entire book to weird weather stories in 2005. Titled "Freaks of the Storm," it includes a passage on red snow. As Cerveny points out there, Charles Darwin himself once came across white snow in the Andes Mountains that turned blood red as it thawed. Another important figure who witnessed the tinted precipitation was the great Sir John Ross, a British naval officer and Arctic explorer.

Reddish or pinkish snow isn't just a historical curiosity; it's still being observed. In February 2018, for instance, a puddle of red water that turned out to be vermillion snow that had melted was found in Glacier National Park.

What's the mechanism behind this? In some cases, scarlet dust may be a contributing factor. "Many of the historic ... 'blood snows' of Europe are associated with moisture mixing with red Saharan dust that is blown northward into Europe, which then falls out as either red rain or snow," Cerveny says.

But it turns out that, more often than not, red snow is the product of algae. And, as scientists have learned recently, the stuff is also contributing to climate change.

We've known for some time now that red or pink snow is generally caused by select types of green algae, including the species Chlamydomonas nivalis. These life forms live in high-altitude snow fields around the world. Although they're technically green in color, the algae produce a red pigment during the warm seasons. Doing so helps protect the organisms from excessive solar radiation.

"I think of the red pigment as a sunscreen," says biologist Arwyn Edwards, a research fellow at Aberystwyth University in Wales. In a recent email interview, Edwards explained the life cycle of Chlamydomonas and related alga.

During the winter, the organisms go dormant. Once spring arrives, they make their way toward the surface of the snow and then bloom. But in order to grow, the life forms need liquid water. "When the algal cells are in wet snow, they are able to swim around and are happy photosynthesizing," Edwards says. This is another reason why the red pigment is so useful.

Dark-colored objects absorb more heat than light-colored ones. In snowy fields where Chlamydomonas is present, you'll find dense communities of the microorganisms. A single millimeter (.03 inches) of snow can contain 500,000 of these life forms. So when a large cluster of the algae starts to release red pigment en masse, they darken the snow they're living in. As a result, the snow itself adopts a pinkish look.

It also begins to melt.

In 2016, Nature published a report written under the leadership of Stefanie Lutz (then a scientist at the University of Leeds). Edwards was one of her co-authors. After looking at 40 samples of the scarlet material from glaciers in Iceland, Norway, Greenland and Sweden, the researchers reached a harrowing conclusion.

"[Our] paper," says Edwards, "is one of the first of several which have identified a 5 to 15 percent acceleration of glacier melting rates as a result of algae on the glacier surface — a biological darkening effect."

Put another way, glacial snow melts 5 to 15 percent more rapidly when Chlamydomonas or similar types of algae are present. That's not good news.

University of Bristol Glaciologist Alexandre Anesio was a co-author on that 2016 Nature paper. Summing up the problem in an email exchange, he says "Basically, because of the darker coloration of snow with the presence of the algae, the snow absorbs more of the solar radiation, which increases retention of heat and melting of the snow ... The process is not insignificant and must be taken into account if we want to understand how fast glaciers and ice sheets will melt with global warming."

Also, there may be a self-perpetuating feedback loop at work here. The red-tinted algae melts snow, which enables more of the algae to grow, which leads to even more melted snow — and so on.

Let's shift gears for a moment and talk about one of red snow's weirdest qualities: its scent. People who come across the algae-laden snow sometimes report that it has a sweet, watermelon-like smell. For the record, Edwards says he's never detected the odor himself — but it's probably the byproduct of those red pigments.

Some popular science writers have also advised against eating red snow because it supposedly causes gastric problems. But Edwards isn't convinced. "As all kinds of other things are accumulated in decaying snow packs, including mineral dusts likely to have the same effect [on one's digestive system], putting the blame on the algae may be unfair," he says.

Now That's Interesting
Snow can come in other colors as well. In January 2018, central Kazakhstan received a layer of black-tinted snow. This may have been the result of industrial pollution. Additionally, there are some types of algae that create yellowish snow. Of course, as any third-grader or dog-owner can tell you, that's not the only way to get yellow snow.

A Former Naturopath Blows the Whistle on the Industry 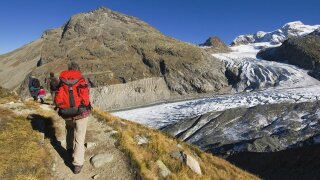 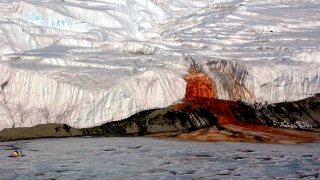 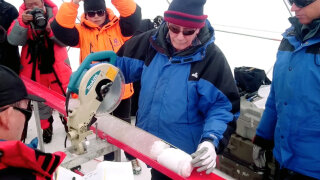