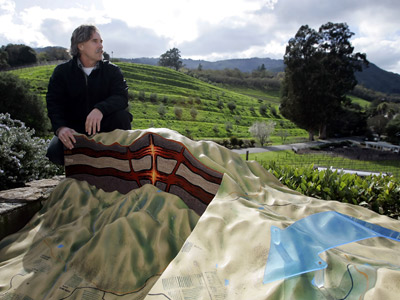 Mike Benziger looks out at his biodynamic vineyard. Learn more about vino with these wine pictures.
AP Photo/Eric Risberg

Many of us have run into this dilemma while grocery shopping: Should we buy organic or not? Organic, local, natural -- the choices are tough to navigate. But that's not all. What if another option was thrown into the mix? Carrots, organically grown carrots or biodynamically grown carrots?

Biodynamically grown? Biodynamic methods are considered a form of organic farming, but biodynamic farming expands on organic's sustainable and natural approach with a holistic, farm-as-an-organism school of thought. The concept is as the word itself would suggest: a combination of biological and dynamic practices, "bio" meaning life and "dyn" meaning force. Like organic farming, biodynamic farms stress biological methods in regard to humane treatment of animals, food quality and soil health (such as green manures, cover crops and composting). However, biodynamics takes it a bit further. In addition to organic biological practices, biodynamic practices also incorporate metaphysical aspects of farming. You read that correctly -- metaphysical. Farmers who practice a biodynamic approach consider the life force of the farm. Think of it this way: Conventional farming is to biodynamic farming as conventional medicine is to homeopathic.

Around the turn of the 20th century, farmers began to use chemical fertilizers in their agricultural practices -- and an unforeseen consequence of that new practice was a deterioration of conditions on farms. Some farmers began to notice poor soil conditions along with weakened health and quality of crops and livestock.

In an effort to find a remedy, Dr. Rudolph Steiner, scientist, philosopher and founder of the Waldorf School, developed the idea of biodynamic agriculture in Europe in 1924. Steiner believed that a farm is a living organism and should be self-contained and self-sustaining. In short, that means he believed that a farm should be able to create and maintain everything needed to stay healthy and fruitful -- an alternative agricultural idea that doesn't include chemicals.

Principles and Methods of Biodynamic Farming 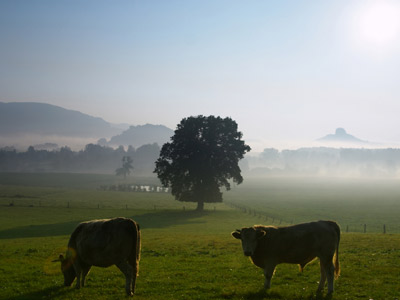 At first glance, it may seem like biodynamic farmers practice a strange magic. Steiner's methodology includes such things as packing dung into cow horn and burying it underground in the autumn to later be transformed into a root-stimulating spray. Weed and pest control preparations involve scattering the ashes of burned pests or weeds on fields to ward off future pest problems, kind of the agricultural equivalent to mounting the heads of one's enemies on pikes outside the city walls. The farmers even consult the stars.

Is it as kooky as it sounds? Biodynamic farmers follow a spiritual methodology that is missing from organic agriculture and practice an accompanying series of steps for keeping farms sustainable and self-nourishing, as outlined by Steiner. It's biology combined with belief. They see the farm as its own closed-loop ecosystem, not just land where food is produced. While it's true biodynamic farmers are in tune with the rhythm of nature, such as how the phase of the moon may impact when it's best to plant seeds and how the planets affect plant growth, it's in combination with sustainable farming practices.

Plant diversity is a method of keeping soil healthy by allowing a variety of plants to grow on uncultivated land; it's enhanced by mixing crops so plants work in support of each other (if one plant depletes a certain nutrient in the soil, a companion plant releases that same nutrient into the soil). Conventional farming practices sometimes adhere to monocropping, such as a farm planting and harvesting soybeans on the same fields year after year. In contrast, crop rotation and an assortment of animal life are an important part of sustainable agriculture. The practice of rotating crops from field to field and raising varied animal species, along with cover crops and green manures, encourages healthy soil, reduces parasites and controls weeds and pests.

Composting is elemental in biodynamic agriculture. It is the source of healthy soil -- the recycled manures and organic waste in the compost pile create humus vital to the farm. When spread on fields, the humus stabilizes nitrogen in the soil, vital to crop productivity. There are nine homeopathic preparations based on extracts from animal, plant and mineral manure, each diluted into sprays and used sparingly to homeopathically treat compost, soil and plants in a process called dynamization. Each preparation is numbered, 500 through 508 -- six are key to composting, two are used to stimulate humus and one is used to suppress fungal disease on crops.

And last but not least, the life force. Life force separates biodynamic farming from other agriculture because it's the acknowledgement that in addition to earthly influences (biology, physics, chemistry), cosmic forces (moon phases, celestial and seasonal cycles) play a role in the life of the farm. 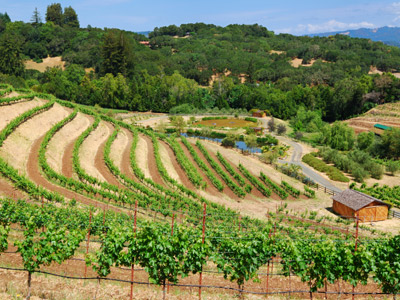 In order to become certified biodynamic, a farm must first be certified organic.
iStockphoto.com/Kazmaniac

Today, some forms of biodynamic agriculture are practiced on farms around the world, with most dynamic practices in Europe, the United States, Australia and New Zealand. Similar to organic farming, biodynamic farms are certified. To be certified as biodynamic, a farm must first be certified organic.

When a farm is organically certified, it is inspected and evaluated by a third-party certifying agent on how well it meets organic standards. Basically, the farm must practice organic methods for at least three years. This includes objectives like choosing only all-natural (nonsynthetic) fertilizers and pesticides, using sustainable processes such as crop rotation and composting, and feeding livestock 100-percent organic feed, as well as treating animals humanely (no hormones or antibiotics). If the farm meets criteria established by the government's National Organic Program (NOP), it's allowed to use the USDA Certified Organic seal (or call itself an organic producer without using the logo) to identify the organic integrity of its products.

Biodynamic farms do all this, plus some. Since all farms are a unique life form, certification is individual to each farm. Maintaining large-scale composting, prohibiting the use of treated seeds, hormones or synthetic substances and permitting only plant-derived pest controls are examples of biodynamic standards. Biodynamic certification is offered through the Demeter Association and its sister company, Stellar Certification Services, and the process is similar to becoming certified organic: The farmer (or processor or handler) submits an application for biodynamic certification and the farm is inspected and evaluated. Based on the evaluation, a farm may be certified as Demeter Certified Biodynamic, In-conversion to Demeter Biodynamic, Aurora Certified Organic and/or Stellar NOP Organic (for when a farm is on its way toward becoming biodynamic).

In 2008, there were 123 Demeter Certified Biodynamic farms and processors in the United States alone, which is about 10,000 acres (40,468,564 square meters) of biodynamically farmed land [source: Demeter Biodynamic Trade Association]. Certification is renewed annually.

As you may imagine, sustaining an agricultural ecosystem is time-consuming and labor-intensive. Farmers who choose to practice biodynamic agriculture are adopting the lifestyle -- the farmer becomes part of that ecosystem to achieve a successful balance of Earth and life forces. Successful or not, the practice of filling a bovine intestine with chamomile raises eyebrows, as does the reliance on lunar cycles. Whether readily accepted or at odds with scientific agricultural approaches, it's hard to argue against a small carbon footprint and the tasty carrot it produces.

Who Was the World's First King?
How Much Water Is There on Earth?
What Happens to the Billions of Cigarette Butts on the Beach?