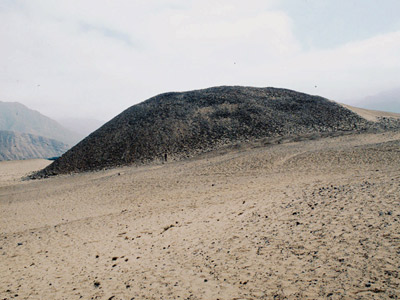 A pyramid at Caral, Peru, is shown buried under a layer of windblown sand and collapsed rock.
AP Photo/Jonathan Haas, Field Museum

­In 2001, archaeologists digging in Peru revealed a shocking discovery: massive man-made structures, hundreds of feet in diameter, built with stone and dirt. They fo­und dozens of these mounds in the arid valleys of Peru's Norte Chico region, running from the Andes Mountains to the west coast.

These certainly aren't the first mounds discovered in Peru, but there's something special about them. They may represent a shift in the most basic understanding of the origins of civilization in the Americas.

They look like flat-topped pyramids, up to 85 feet (26 meters) tall [source: ScienceDaily]. Compared to the pyramids of the Mayan empire i­n South America or, later, the Incan empire in Peru -- structures that were hundreds of feet tall -- that's not so impressive. Except that these mounds in Norte Chico predate any large structures attributed to either the Incas or the Mayans. (They're even older than the Egyptian pyramids, for that matter.) It seems that these Peruvian mound builders were the first complex civilization in the Americas.

­­The recently discovered mounds, found to be about 5,000 years old, predate the early Mayans by perhaps a thousand years [sources: Joyce, Lovgren]. But perhaps even more surprising is the location of the mounds within Peru. Civilizations tend to develop around resource availability. People are naturally drawn to abundance in water and food sources. But the Norte Chico region of Peru is totally dead. The archaeologists were digging in a place that seems incapable of supporting life. The land is dry as a bone, and there are very few water sources and hardly any green things as far as the eye can see.

Why would an advanced civilization spring up in such a desolate place? How could the mound builders have survived under such circumstances, let alone thrived to the point of introducing a new way of life in the Ameri­cas?

The answer, according to the group of archaeologists who discovered the mounds, could be something very familiar to present day civilizations: climate change.

It starts with the discovery of seashells in a nearly waterless stretch of Peru. 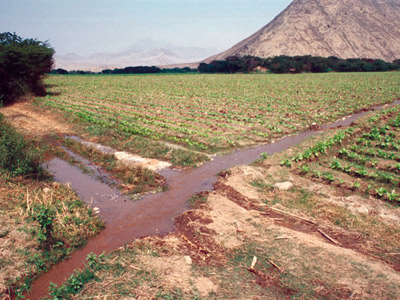