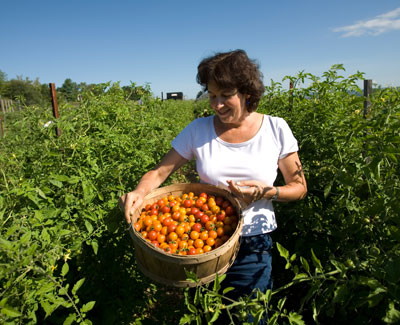 Ask a few conventional farmers why they haven't transitioned to organic farming and each will give you a different answer. The answers usually have to do with one larger reason, though: agricultural economics. Some studies show organic farms produce smaller yields than conventional farms; organic farms yield only 75 to 90 percent of the crop of conventional farms. Farming organic foods and products requires meeting federal rules and regulations, often making the process more labor and management intensive.

It takes about three years to transition from conventional farming techniques to organic methods, and it requires documentation of an organic plan along with additional paperwork and inspections.

In 1990, the U.S. Congress adopted the Organic Foods Production Act (OFPA) as part of the 1990 Farm Bill, and the USDA issued uniform standards used to certify organic methods. All products sold as organic must come from certified producers.

Since 2002, the USDA's National Organic Program (NOP) oversees organic certification. Third-party independent organizations accredited by the USDA handle evaluations and inspections of producers, processors and handlers -- it's not just the farmers who must follow the rules, but also the people they work with -- to determine whether or not they uphold organic methods and practices. Those who meet the guidelines are certified and allowed to use organic labeling and to market their products as organic. USDA regulations allow products with at least 95 percent organic ingredients to be labeled "USDA Organic" [source: USDA].

Organic certification is costly but is not intended to be prohibitive. The NOP set the organic certification rate at $750 per farm, but the actual cost varies based on the certifying agency and the size of the farm. The NOP also offers some financial assistance, up to $500. Small farms producing less than $5,000 worth of organic products a year do not require certification.

Data shows that only 0.4 percent of USDA's $2.5 billion budget focuses on organic agricultural research (about $10 million). While the government is not spending its money on organics, consumers are. The market grew 20 percent to 24 percent annually during the 1990s. And recently the Hartman Group reported that 90 percent of American consumers were either buying or considering buying organic products, up from 60 percent two years ago [source: Hartman Group].

Organics get good press because they appear in studies to be healthier for our planet and us. The American Cancer Society estimates that 85 percent of cancers are from environmental toxins, such as pesticides, and not from genetic causes. Eating an organic diet (as prescribed by federal guidelines)  has shown in a study supported by the Environmental Protection Agency to decrease detectable levels of pesticides in children.

Researchers are continuing to look at ways to improve upon organic farming practices, including methods of animal health care (such as homeopathy), uses of organic pesticides and the environmental impacts of organic and conventional farming.

What is Biodynamic Farming?

Austrian scientist Rudolf Steiner, a freethinker who combined methods of organic farming with spirituality, introduced biodynamic agriculture in 1924. Biodynamic farming is a nonchemical agricultural movement that emphasizes the health-giving forces of nature and predates organic agriculture by about 20 years.

Methods unique to biodynamic farming include herbal and mineral additives in compost and the use of an astronomical calendar with which to base planting and harvesting.