What are the pros and cons of hydrogen energy? 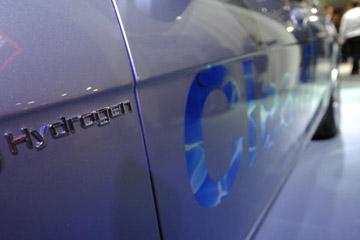 It's no understatement to say that we're in the midst of a global energy crisis. We are reaching the end of our reliance on non-renewable sources of energy like oil, coal and natural gas. With the world's oil wells predicted to dry up in a mere four decades, the scramble is on to find renewable energy sources that will keep our cars, homes and businesses running without destroying our environment [source: The Independent].

One hope for our energy future lies in hydrogen -- an infinitely renewable and relatively pollution-free fuel that scientists and politicians alike see as a viable alternative to fossil fuels. The idea of hydrogen power is so enticing that the Bush administration pledged $1.2 billion for hydrogen research and development back in 2003 [source: U.S. Department of Energy].

So does hydrogen fuel cell technology live up to its promise of delivering a clean and efficient energy source? That depends on how it's produced. On the one hand, hydrogen is plentiful in sources such as natural gas and water -- and unlike fossil fuels, hydrogen is relatively gentle to the environment. In fact, it's essentially pollution-free. A hydrogen fuel cell in a car produces zero emissions; the only substances released through its tailpipe are water vapor and heat. Producing hydrogen fuel cells doesn't release pollution either, provided that renewable sources such as water or solar energy are used in the production process. And if that wasn't enough, hydrogen fuel is about three times more efficient than gasoline [source: US News].

Then again, hydrogen isn't always clean to produce. It's expensive to pull hydrogen from water. Non-renewable sources of hydrogen, such as oil and natural gas, are much cheaper, but using them still puts a drain on our fossil fuels supplies. Ironically, the carbon dioxide released in the process of producing hydrogen from fossil fuels cancels out any benefits to the environment. Experts say hydrogen that escapes during the production process could erode the ozone layer even further and exacerbate global warming [source: PBS]. There are other problems as well: Scientists are still struggling with the challenge of how to store hydrogen. Because it has such a low energy density, hydrogen needs to be stored and transported under high pressure -- which makes it bulky and impractical. The pressure issue compounds another issue with hydrogen energy; like gasoline, hydrogen is highly flammable, but unlike gas, it has no smell. Sensors must be used to detect a leak before hydrogen can combust. Another issue is the need to provide enough refueling stations to supply all the hydrogen-powered cars throughout the country. Are hydrogen fuel producers willing to put a hydrogen station on virtually every corner?

Are you still fuzzy about hydrogen and hydrogen fuel cell technology? The next page covers all the basics.

Hydrogen is the most basic and most common element on Earth. Represented by the letter "H" on the periodic table, hydrogen is a gas that combines with oxygen to make water (H2O), and with carbon to form compounds such as methane and coal.

Hydrogen is also a potent source of clean energy. In fact, it has the highest energy content of any fuel we use today [source: U.S. Energy Information Administration]. Hydrogen itself isn't available on Earth, but it can be produced. Using hydrogen energy isn't hard on the environment, because only water and heat are released as byproducts. However, the process needed to produce hydrogen can be less environmentally friendly.

To produce usable hydrogen, it has to be separated from water, biomass (plant and animal waste), coal, or natural gas. About 95 percent of the hydrogen used today is produced by a process called steam reforming -- separating hydrogen atoms from carbon atoms in methane [source: National Renewable Energy Laboratory]. This process releases greenhouse gasses, which contributes to global warming.

The other production method, electrolysis, separates hydrogen from water. Electrolysis can be powered by renewable energy such as wind, hydropower and solar energy, so that it produces no emissions. The downside is that it's expensive. For hydrogen to reach its full potential as an energy source, scientists need to figure out a way to produce it inexpensively from clean, renewable sources.

Currently, the U.S. produces about 9 million metric tons (9 billion kilograms) of hydrogen each year -- enough to power up to 30 million cars [source: EIA]. Most of that hydrogen is used in refining and treating metals, as well as in food processing. NASA also uses hydrogen as a fuel in its space program.

The key to using hydrogen as power is the fuel cell. A hydrogen fuel cell converts the hydrogen energy into electricity. Fuel cells can be used in cars, and to provide electricity to rural areas with no power lines. To power a car, the electricity produced from hydrogen energy flows into the battery, acting much like today's hybrid electric cars.

Speed over to the next page for lots more information on alternative energy.

We've Finally Recorded the Hum at the Bottom of the Sea
Niagara Falls Will Temporarily Stop Gushing in 2019
Do People Still Die in Quicksand?