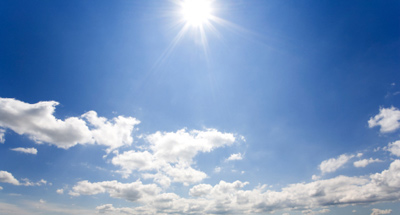 The ozone layer is miles above us but protects us from most of the sun's harmful ultraviolet rays.
©iStockphoto.com

­If you've ever gotten a nasty sunburn, yo­u've experienced the singeing effects of ultraviolet radiation from the sun. In fact, you probably made a personal vow to forever apply (and reapply) sunscreen on sunny days. Luckily, the earth shades us from the vast majority of intense ultraviolet light with its own sunscreen -- the ozone layer. Without the ozone layer, we wouldn't just sunburn, there's a chance we'd go extinct. The sheer intensity of unadulterated ultraviolet sunlight would threaten most species that live on the surface of the earth.

The ozone layer gets its name from ozone gas, an allotrope, or form, of the element oxygen. Ozone gas has become so synonymous with the ozone layer that people now refer to the layer as "the ozone." However, ozone gas doesn't just coat our earth's stratosphere. It can be found on the earth's surface as well -- used for such things as bleaching, sterilizing water, and removing unpleasant smells from products.

Despite its name, the ozone layer isn't just ozone gas. Oxygen gas, another allotrope of oxygen, is abundant in the ozone layer, as well. Oxygen gas is essential for the creation of ozone gas, and it absorbs ultraviolet light, preventing that light from reaching the earth's surface. The ozone layer forms naturally in the stratosphere, where ozone and oxygen gas are always converting into each other -- continually "reapplying" the earth's sunscreen.

Scientists study the ozone layer to grasp its patterns of change and to determine how humans affect this change. If the ozone is suffering, how are we to blame? First, let's investigate what this layer really is.

It's pretty confusing when we hear about the dangers of ozone depletion one day and the need to reduce ozone the next. Ozone gas is extremely helpful -- but only when it's miles away from us in the ozone layer. When car exhaust and other things cause the production of ozone gas near the surface of the earth, it pollutes the air and causes health problems. Read How Ozone Pollution Works to learn more.