Does smog make for beautiful sunsets? 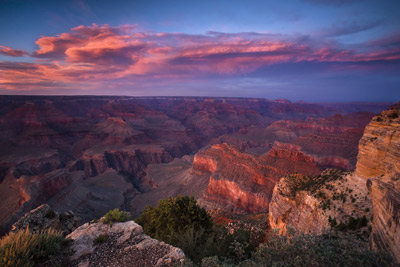 There aren't too many positives to be found in air pollution. It's unhealthy, unsightly and damaging to the planet that we hope to spend a lot more time on. But could it be that there's actually an upside here? Might the sky-blocking phenomenon known as smog actually enhance sunsets?

Most people think the answer is yes -- that smoggy cities like Los Angeles and Beijing, with hazy skies most of the time, at least get to have extra-brilliant sunsets to cough at as a result of that haziness. As it turns out, those people are mostly wrong. It all starts with the science of sunset -- how those colors come to sp­lash across the sky as the sun goes down.

­When the sun is high in the sky, its light travels a relatively short path through the atmosphere to reach your eye, the viewing point of the light. In that sunlight are all of the wavelengths of visible light, and each wavelength is viewed as a different color. The molecules in Earth's atmosphere, mostly nitrogen and oxygen molecules, scatter some of those wavelengths, but not others. Because those molecules are small compared with the wavelengths of visible light, they only end up scattering the shorter wavelengths, sending­ those light beams in all directions, out of the direct path of the light on its way to your eye. This selective scattering of wavelengths, or colors, is called Rayleigh scattering. The sky is blue during the daytime because the wavelengths for violet and blue are the shortest in the spectrum. They are scattered more than any other colors in the light, and as these wavelengths scatter across the sky, that sky turns blue. (It would actually be violet except that the human eye is more sensitive to blue [source: NOAA].)

As the sun moves across the sky, this changes. 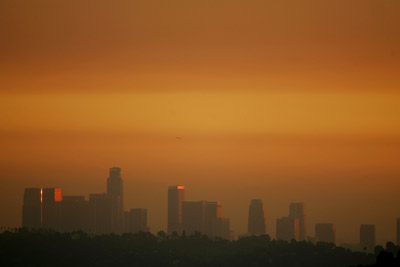 Remember how the molecules in the atmosphere are scattering blue and violet more than the longer wavelengths of yellow, orange and red? This same Rayleigh scattering turns the sky from blue to combinations of red, orange and yellow as the distance between the sun and your eye increases, because the light has to travel through more of the atmosphere.

As light travels through the atmosphere, hitting those molecules along the way, more and more of the shorter wavelengths are scattered. By the time the light reaches your eye, all the blue and violet has been scattered out, leaving only the longer wavelengths in the sky for you to see. That's why a setting sun turns the sky red, orange, yellow and all shades in between. All of that scattered blue and violet is busy creating a blue daytime sky somewhere else in a different time zone.

This is all happening in a clear sky, with mostly nitrogen and oxygen doing the scattering. If you add other molecules into the mix -- molecules in smog, for instance -- the picture starts to change.

Smog, technically speaking, is not the demon it's made out to be. Smog is simply a combination of the words "smoke" and "fog," and it comes from lots of different sources, some totally natural. It's composed mostly of aerosols, solid or liquid particles suspended in the sky. Volcanic eruptions produce heavy smog when they send tons of volcanic ash into the sky. Forest fires do the same when all of that burning matter billows upward, turning the sky nearly opaque.

These natural causes of smog are negligible in big cities, though. Factory and coal-power exhaust, car exhaust and leaking gas, as well as the byproducts of burning plastics and aerosol spray cans send far more particles into the atmosphere than any natural events do. This smog is a mixture of chlorofluorocarbons (greenhouse gases), hydrocarbons, sulfuric acid and lots of other unpleasant pollutants [source: Health and Energy]. In major cities, smog is this human-made mixture of chemicals.

Here's where the confusion comes in. Whereas volcanic smog and forest-fire smog are composed of fairly uniform aerosols, man-made smog is composed of countless different molecules and different types of matter, and all of these aerosol particles vary in size. Size is the deciding factor in whether aerosols enhance a sunset's colors or hinder them.

When something like a volcanic eruption sends particles into the air, it produces smog that blocks only certain wavelength of light. As sunlight moves through this atmosphere, it encounters nitrogen and oxygen, which scatter the blue end of the spectrum, and volcanic ash, which is larger and scatters a good amount of the longer yellow wavelengths, too. What results is an incredibly red sunset until the ash clears.

But smog from a smoke stack or ­car is composed of particles of so many different sizes, the scattering is nearly indiscriminant. Rayleigh scattering is no longer in effect, since instead of the atmosphere scattering only certain wavelength as sunlight passes through it, it scatters everything. The aerosols in smog are varied, and relatively large, to the point that they can scatter every wavelength of light. The result is a sunset with no colors at all. The sky is simply a hazy, grayish white, with all of the yellow, orange and red having been scattered out before they could reach the eye.

Chances are, if you're seeing an especially colorful sunset in L.A., it's because the smog is low that day, not because it's heavy.

­For more information on smog, sunsets and related topics, including other atmospheric factors that affect sky color, view the links on the next page.