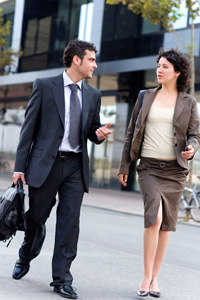 How often do you walk around your neighborhood, walk to school or run errands on foot? If you're like many people, your walking shoes are cooling their heels. The number­ of adults in the United States who walk every day declined by 40 percent between 1977 and 1995, while short car trips that are less than a mile (1.6 kilometers) are increasingly common [source: Slater]. Yes, we're hopping in our cars to travel less than one mile, which is about 2,000 footsteps (out of the 10,000 recommended steps per day) [source: The Walking Site].

Walking can cut both your weight and your carbon footprint. One study suggests if Americans traded their cars for their feet for just 30 minutes every day, they'd collectively burn 10.5 billion calories. Overall, the United States would save 6.5 billion gallons (24 billion liters) of gasoline and cut its carbon dioxide emissions by 64 million tons (58 million metric tons) [source: CNN].

Parking your car in favor of walking is partly personal choice -- cars are convenient. But it also has a lot to do with how easy it is to walk around your city or town. If a neighborhood is pedestrian-friendly and includes sidewalks, the people who live in it are 65 percent more likely to walk [source: Complete the Streets]. The walkability of a neighborhood describes how easy it is to walk around that neighborhood. Are there sidewalks? Is there heavy traffic? What is the crime rate?

­­Walkability is also part of a growing movement called New Urbanism, which emphasizes not only neighborhood walkability but mixed-use developments, smart transp­ortation and a good quality of life. All the places in your community that are in easy walking distance from your location (home, school, office or wherever you consider your home base to be) is your walkshed. A walkshed usually extends less than one mile from your home base, and the more places there are for you to walk to, the better. A well-stocked walkshed includes a variety of things, from parks and other public spaces to retail stores, restaurants, libraries and other services.

How do you know how good your walkshed is? Aside from giving it a test walk, the walkability of a neighborhood can be rated with a walk score and ranked by a Web site called Walk Score. Let's find out how Walk Score works, next. 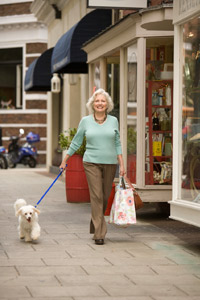 Living in a well-stocked walkshed allows you to multitask and take the pooch along for the outing.
Yellow Dog Productions/Digital Vision/Getty Images

Walk scores help people find walkable communities in which to live, as well as help them det­ermine how walkable their current neighborhood is. The Walk Score Web site uses Google Ma­ps, specifically Google's Local Search API (applicati­on programming interface), to find the stores, restaurants, bars, parks and other amenities within walking distance of any addr­ess you enter. Walk Score currently includes addresses in the United States, Canada and the United Kingdom.

Using a patent-pending algorithm, Walk Score establishes neighborhood boundaries using data from the real estate information Web site Zillow, calculates the distances from your entered location to amenities in your walkshed via Google Maps, and weighs in the population density information from the 2000 census.

Based on these three fold criteria, Walk Score ranks an address with a score between zero and 100 (100 being the best). Amenities within 0.25 miles (0.4 kilometers) of the central location are given the most points -- the greater the distance, the fewer points are awarded. Places farther than one mile (1.6 kilometers) away are given zero points. Scores are broken into five categories. The most desirable scores are between 70 and 100: 90-100 is considered a walkers' paradise where residents don't need to own a car; 70-89 is very walkable and residents probably don't need a car. Below 70 and you get into the neighborhoods that are somewhat walkable but probably necessitate public transportation, a bike or a car for getting around. A score below 50 means the community is car-dependent, and a score below 25 means residents need to drive everywhere.

A few caveats about scoring: Walk Score depends on the available data sources. If it doesn't know about the Starbucks located just across the street from your house, it can't include it in its rankings. Luckily, you have the opportunity to add missing community amenities to Google's Local Search API and in doing so, increase your walk score rank. Walk Score is also blind to some important details -- it doesn't include such factors as topography, street design, available public transportation or bodies of water in its rankings. It calculates as the crow flies, which means that if there's a lake between you and the closest coffee shop, Walk Score assumes you're more than happy to swim for your caffeine fix.

The Walk Score algorithm also doesn't rate a neighborhood on how pretty it is, but rather how easy it is to live car-free. If you live near a nature preserve or hiking trails, that greenery may improve your quality of life, but it won't improve your walk score.

Walking requires no special training or equipment and if you do it every day, it can help you manage your blood pressure, blood sugar and cholesterol levels, as well as reduce your risk of heart attack, stroke, type 2 diabetes and some types of cancer.

­A good walking speed is brisk, about 3 to 4 miles per hour (4 to 6 kilometers per hour), and just 30 minutes a day (including three 10-minute bursts) can help you stay in shape, manage your weight and­ feel good.