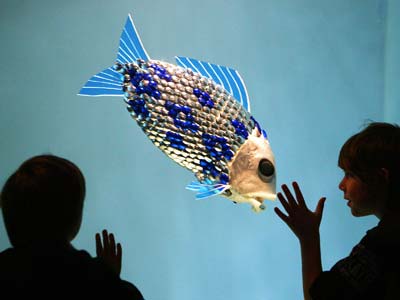 This shining jewel of a robot employs the fluid movements of an actual carp to navigate through the water. See more green science pictures.
Adrian Dennis/AFP/Getty Images

An old fisherman and his wife live on the shores of a polluted sea. Each morning, the gray-bearded angler rides out on the waves and casts his net, pulling in ever-dwindling hauls of fish. Then one day he catches something truly resplendent: a large fish of gleaming gold, speckled with scales of sapphire. What could this mean?

It may sound a bit like Alexander Pushkin's "The Tale of the Fisherman and the Fish," but this fictional encounter may soon be a possibilty. Only instead of offering wishes in exchange for its release, this golden fish will hunt down the sources of ocean pollution.

Developed by scientists at the United Kingdom's University of Essex, several of these $30,000 robotic fish dove into the waters off the port of Gijon in northern Spain in 2012. Once there, the bots began sniffing out and analyzing signs of pollution as part of the multiyear SHOAL research project funded by the European Commission and coordinated by the engineering firm BMT Group Ltd.

Examples of this fishy technology have already tested the waters of the London Aquarium, where they successfully swam free of human control. In addition, they didn't attract the attention of their flesh-and-blood predatory tank mates.

As the $30,000 robotic fish consists entirely of mechanical and electronic parts, it obviously wouldn't make for the most satisfying shark dinner -- nor would the old woman in Pushkin's story be able to do much with it in a stew. The real payoff to both humans and fish is the robot's potential to provide a real-time understanding of ocean pollution.

So why all the work to make it look like an animal? How do the fish bots report back to the researchers, and why aren't sharks interested in taking a bite?

Swim over to the next page to find out. 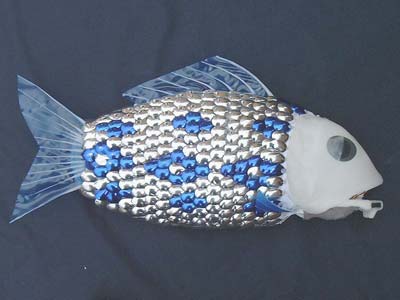 BMT Group's robotic fish have received a lot of attention due to their environmental mission, but you really can't ignore the fact that they look and swim so much like actual fish. Don't be fooled: This isn't just window dressing for the media. Their very design depends on biomimetic principles.

Biomimicry plays a role in many cutting-edge engineering projects, but it depends on a rather simple proposition: Why waste years of laboratory time trying to overcome a design obstacle when nature has already knocked it out of the park? Really, what human team of developers can rival millions of years of evolution? If you want to fly, look to the birds. If you want to superheat a liquid or climb walls, study how organisms achieve these ends. Sure enough, if you want to create an energy-efficient, autonomous aquatic robot, look no further than the denizens of the ocean. (Read How Biomimicry Works to learn more.)

Efficiency was key to the developers because each robot needed to not only navigate an underwater environment on its own, but also operate for hours on battery life. While tethered remotely operated vehicles (ROVs) have proven invaluable to underwater exploration, their clunky designs are far from efficient, often depending on surface generators and umbilical cords. Fortunately for the team of designers at the University of Essex, energy efficiency is one of nature's specialties.

By employing the same movement mechanics as its organic counterpart, the robotic fish is able to squeeze eight hours of operation out of its battery life. When levels begin to dip, the bot returns to a central recharging hub to rest up for the next big day of pollution hunting.

Each robotic fish sniffs out trouble with an array of tiny chemical sensors capable of detecting dissolved contaminants, as well as those pooled on the surface of the water. As they make these discoveries, the robots continually send all the data back to the central hub with ultrasonic WiFi transmitters and receivers. The fish also can keep in touch with each other using these gadgets. All this adds up to an expanding, real-time view of an area's waterborne pollution, complete with chemical analysis and clues to where it may originate.

Before deployment, scientists wanted to ensure that the robot fish don't produce noise that might disrupt the natural environment. They already suspected that sharks would avoid the bot fish due to their electromagnetic fields. If the aquatic spies are a success in Gijon, then scientists hope to expand their operations around the world.

Of course, these fish aren't the only robots in the sea. On the next page, we'll look at some other varieties of pollution-sniffing underwater automatons.

A Swim in the Robotic Ocean 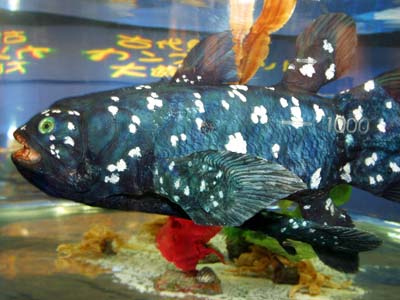 The scientists at the University of Essex aren't the only people interested in creating biomimetic, mechanical sea life. As it turns out, they're not even the only ones looking to unleash such robots on the world's watery pollution problem. In this section, we'll run through a few of the other interesting robot fish out there and look at what they might have to offer the planet.

Robofish: University of Washington researcher Kristi Morgansen developed three biomimetic swimming robots and while they're not as streamlined as those associated with the SHOAL project, they do boast similar technology. They communicate via underwater sound waves, act autonomously and use an array of sensors to monitor their surroundings. While the robofish have to surface every 20 minutes to upload their collected information via satellite, the machines, reportedly, could operate up to six months at a time on a single battery charge [source: Bland]. Morgansen discussed deploying the fish in Washington's Puget Sound to track whales and measure pollution.

The Robotic Squid: Researchers at Japan's Osaka University built a robot squid. As the name implies, this mechanical prototype uses undulating rubber panels on each side of its chassis to maneuver through the water. Plus, its flat body will allow it to enter some of the narrower nooks and crannies of the ocean. While the bot isn't far enough along to have any specific roles assigned to it yet, designers hope to use it to monitor underwater conditions and scout out resources.

Roboctopus: Researchers from Greece, Italy, Israel, Switzerland, Turkey and the United Kingdom intend to build a robot with a gentle touch -- the soft caress of mechanical tentacles, to be exact. Each of the Roboctopus' tentacles will contain four cords, each containing electroactive polymers that contract when hit with an electric field, causing the tentacle to flex this way or that. The robot could use these limbs to walk across delicate ocean floor environments without disrupting or damaging the surroundings. These features may enable scientists to better study the effects of pollution on coral reef environments.

These aren't the only biomimetic robot designs based on sea life. Other scientists and research teams have looked to sharks, sea turtles, lampreys and various fish species for inspiration. If all the pollution sniffing doesn't help us protect our environment, then at least we can look forward to a day when mechanized things scuttle and weave through an otherwise lifeless sea.

Explore the links on the next page to learn even more about robotics and the environment.