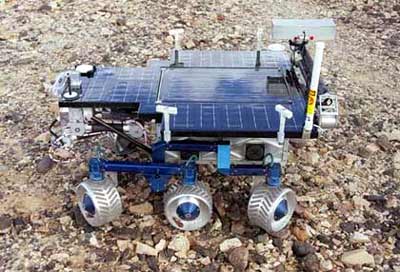 Robotic arms are relatively easy to build and program because they only operate within a confined area. Things get a bit trickier when you send a robot out into the world.

The first obstacle is to give the robot a working locomotion system. If the robot will only need to move over smooth ground, wheels or tracks are the best option. Wheels and tracks can also work on rougher terrain if they are big enough. But robot designers often look to legs instead, because they are more adaptable. Building legged robots also helps researchers understand natural locomotion -- it's a useful exercise in biological research.

Typically, hydraulic or pneumatic pistons move robot legs back and forth. The pistons attach to different leg segments just like muscles attach to different bones. It's a real trick getting all these pistons to work together properly. As a baby, your brain had to figure out exactly the right combination of muscle contractions to walk upright without falling over. Similarly, a robot designer has to figure out the right combination of piston movements involved in walking and program this information into the robot's computer. Many mobile robots have a built-in balance system (a collection of gyroscopes, for example) that tells the computer when it needs to correct its movements.

Bipedal locomotion (walking on two legs) is inherently unstable, which makes it very difficult to implement in robots. To create more stable robot walkers, designers commonly look to the animal world, specifically insects. Six-legged insects have exceptionally good balance, and they adapt well to a wide variety of terrain.

Some mobile robots are controlled by remote -- a human tells them what to do and when to do it. The remote control might communicate with the robot through an attached wire, or using radio or infrared signals. Remote robots, often called puppet robots, are useful for exploring dangerous or inaccessible environments, such as the deep sea or inside a volcano. Some robots are only partially controlled by remote. For example, the operator might direct the robot to go to a certain spot, but not steer it there -- the robot would find its own way.

What is it Good For?

Mobile robots stand in for people in a number of ways. Some explore other planets or inhospitable areas on Earth, collecting geological samples. Others seek out landmines in former battlefields. The police sometimes use mobile robots to search for a bomb, or even to apprehend a suspect.

Mobile robots also work in homes and businesses. Hospitals may use robots to transport medications. Some museums use robots to patrol their galleries at night, monitoring air quality and humidity levels. Several companies have developed robotic vacuums.