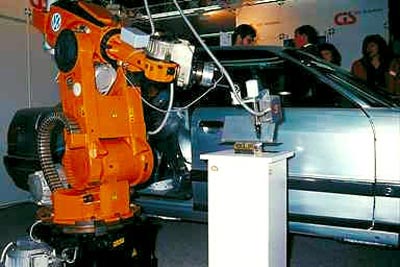 Robotic arms are an essential part of car manufacturing.

The term robot comes from the Czech word robota, generally translated as "forced labor." This describes the majority of robots fairly well. Most robots in the world are designed for heavy, repetitive manufacturing work. They handle tasks that are difficult, dangerous or boring to human beings.

The most common manufacturing robot is the robotic arm. A typical robotic arm is made up of seven metal segments, joined by six joints. The computer controls the robot by rotating individual step motors connected to each joint (some larger arms use hydraulics or pneumatics). Unlike ordinary motors, step motors move in exact increments (check out Anaheim Automation to find out how). This allows the computer to move the arm very precisely, repeating exactly the same movement over and over again. The robot uses motion sensors to make sure it moves just the right amount.

An industrial robot with six joints closely resembles a human arm -- it has the equivalent of a shoulder, an elbow and a wrist. Typically, the shoulder is mounted to a stationary base structure rather than to a movable body. This type of robot has six degrees of freedom, meaning it can pivot in six different ways. A human arm, by comparison, has seven degrees of freedom.

Your arm's job is to move your hand from place to place. Similarly, the robotic arm's job is to move an end effector from place to place. You can outfit robotic arms with all sorts of end effectors, which are suited to a particular application. One common end effector is a simplified version of the hand, which can grasp and carry different objects. Robotic hands often have built-in pressure sensors that tell the computer how hard the robot is gripping a particular object. This keeps the robot from dropping or breaking whatever it's carrying. Other end effectors include blowtorches, drills and spray painters.

Industrial robots are designed to do exactly the same thing, in a controlled environment, over and over again. For example, a robot might twist the caps onto peanut butter jars coming down an assembly line. To teach a robot how to do its job, the programmer guides the arm through the motions using a handheld controller. The robot stores the exact sequence of movements in its memory, and does it again and again every time a new unit comes down the assembly line.

Most industrial robots work in auto assembly lines, putting cars together. Robots can do a lot of this work more efficiently than human beings because they are so precise. They always drill in the exactly the same place, and they always tighten bolts with the same amount of force, no matter how many hours they've been working. Manufacturing robots are also very important in the computer industry. It takes an incredibly precise hand to put together a tiny microchip.

The Czech playwright Karel Capek originated the term robot in his 1920 play "R.U.R." In the play, machine workers overthrow their human creators when a scientist gives them emotions. Dozens of authors and filmmakers have revisited this scenario over the years.

Isaac Asimov took a more optimistic view in several novels and short stories. In his works, robots are benign, helpful beings that adhere to a code of nonviolence against humans -- the "Laws of Robotics."