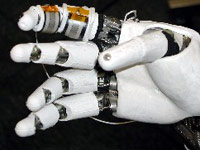 A robotic hand, developed by NASA, is made up of metal segments moved by tiny motors. The hand is one of the most difficult structures to replicate in robotics.
Photo courtesy NASA

The vast majority of robots do have several qualities in common. First of all, almost all robots have a movable body. Some only have motorized wheels, and others have dozens of movable segments, typically made of metal or plastic. Like the bones in your body, the individual segments are connected together with joints.

Robots spin wheels and pivot jointed segments with some sort of actuator. Some robots use electric motors and solenoids as actuators; some use a hydraulic system; and some use a pneumatic system (a system driven by compressed gases). Robots may use all these actuator types.

A robot needs a power source to drive these actuators. Most robots either have a battery or they plug into the wall. Hydraulic robots also need a pump to pressurize the hydraulic fluid, and pneumatic robots need an air compressor or compressed air tanks.

The actuators are all wired to an electrical circuit. The circuit powers electrical motors and solenoids directly, and it activates the hydraulic system by manipulating electrical valves. The valves determine the pressurized fluid's path through the machine. To move a hydraulic leg, for example, the robot's controller would open the valve leading from the fluid pump to a piston cylinder attached to that leg. The pressurized fluid would extend the piston, swiveling the leg forward. Typically, in order to move their segments in two directions, robots use pistons that can push both ways.

The robot's computer controls everything attached to the circuit. To move the robot, the computer switches on all the necessary motors and valves. Most robots are reprogrammable -- to change the robot's behavior, you simply write a new program to its computer.

Not all robots have sensory systems, and few have the ability to see, hear, smell or taste. The most common robotic sense is the sense of movement -- the robot's ability to monitor its own motion. A standard design uses slotted wheels attached to the robot's joints. An LED on one side of the wheel shines a beam of light through the slots to a light sensor on the other side of the wheel. When the robot moves a particular joint, the slotted wheel turns. The slots break the light beam as the wheel spins. The light sensor reads the pattern of the flashing light and transmits the data to the computer. The computer can tell exactly how far the joint has swiveled based on this pattern. This is the same basic system used in computer mice.

These are the basic nuts and bolts of robotics. Roboticists can combine these elements in an infinite number of ways to create robots of unlimited complexity. In the next section, we'll look at one of the most popular designs, the robotic arm.